This article is over 19 years, 10 months old
THE NATIONAL conference of the giant public sector union Unison took place in Bournemouth last week, as 800,000 of the union's members in local councils in England and Wales balloted on strikes over pay. If that ballot, and similar ballots in the GMB and TGWU unions, are successful a massive one-day national strike of council workers could take place on Wednesday 17 July.
By HAZEL CROFT reports
Downloading PDF. Please wait...
Saturday 29 June 2002

THE NATIONAL conference of the giant public sector union Unison took place in Bournemouth last week, as 800,000 of the union’s members in local councils in England and Wales balloted on strikes over pay. If that ballot, and similar ballots in the GMB and TGWU unions, are successful a massive one-day national strike of council workers could take place on Wednesday 17 July.

The Unison conference gathered together council workers, health workers, low paid school and education workers, and many others working at the sharp end of public services. Of the well over 1,000 people attending, a high proportion-over 400-were first time delegates. The union’s leadership was forced to reflect the increasingly left wing mood of its members.

This is a huge shift from the Unison leadership’s initial backing for the war against Afghanistan. The union’s leaders backed motions against privatisation, against the war in Afghanistan, and for a demo against racism in the north west of England. But the leadership was also anxious to control the mood of the conference. So it argued against and defeated motions calling for a national demonstration and for united action against privatisation.

This was despite the fact that delegates at the union’s local government conference had backed similar motions just a few days earlier. All this meant there was a contradictory mood at the conference. New Labour Northern Ireland secretary John Reid received a good reception, for example. But he had to butter up delegates with a jokey speech.

‘I was the only one who could find enough protection people to send down here,’ he said, in a reference to the fact that the union leadership didn’t dare invite a minister directly responsible for funding public services to face delegates.

The mood of the conference was often quite subdued. But throughout, the feeling of betrayal and anger at the Labour government was almost taken for granted. In the debate on pensions Tony Sexton from Wales attacked the union leadership’s acceptance of a deal which said those working for private firms should have conditions ‘broadly comparable’ with public sector workers.

Call for initiatives against BNP Nazis

THE CONFERENCE unanimously passed an emergency motion calling for action against the Nazi BNP after its successes in Burnley in the recent local elections. Dave Prentis criticised ‘politicians who should know better for using the language of swamping and flooding’.

The motion called for Unison to ‘urgently pursue with the TUC the call for a demonstration in the Greater Manchester area’, and to pay ‘special attention to publicising the demonstration in Burnley, Oldham and other areas where the BNP achieved high levels of support’.

It also called for support for a TUC-organised Respect festival in the north west of England. And it instructed the Unison executive to ‘support anti-fascist, anti-racist and anti-Nazi initiatives in Burnley and other areas’.

Key is unity and leadership

‘We need national action against privatisation-of care homes, hospitals and local government. We mustn’t ignore the voice of other trade unions. We need them by our side to show united strength against privatisation.’ Karen Reissmann, a Manchester nurse, was also applauded when she said: John Reid told us, don’t make public services a centre of class struggle. Unfortunately the people bringing the battle to the public services are our government-a Labour government. Week after week they trash our services and sell us off to private contractors. We need to fight privatisation with all the tools in our hands.’

But though such speeches found a real echo, the union leadership defeated calls for a national demo and strike action. General secretary Dave Prentis called demonstrations ‘sterile’. One executive member, Jane Carolan, spent all of her three-minute speech attacking the GMB union.

But, as Kenny Bell from Newcastle said, ‘We are up against a national, and international, programme of privatisation. We need a national programme of resistance and national action to stop this onslaught. Twelve months ago in Italy they were having the same discussions as us. A few months later the trade unions got three million people on the streets of Rome. It is about confidence and leadership. The union has to give people a real lead and confidence.’

ONE OF the biggest fringe meetings at the conference was the 300-strong United Left rally. Speakers included Alex Lopez from Colombia, who talked about fighting privatisation, and a speaker from the left wing Italian Rifondazione party. In the discussion from the floor Kenny Bell from Newcastle inspired delegates when he said, ‘If we are going to defeat privatisation we have to fight on a global level. We have to globalise the resistance.

‘I was privileged to go to the World Social Forum in Porto Alegre. That showed you can organise across national boundaries, across continents. We have a major responsibility to mobilise for the European Social Forum in Florence in November,’ said Kenny.

Other fringe meetings included 250 people at a meeting called by the Greater London region to debate the union’s political funds, over 100 people at a Stop the War Coalition meeting, and 60 people at an Anti Nazi League meeting.

DELEGATES censured the union executive in a debate over Unison’s Affiliated Political Fund, which pays members’ money to the Labour Party. Last year’s conference instructed Unison leaders to conduct a review of the fund and report back this year.

But union leaders, anxious not to upset their friends in the New Labour government, failed to deliver. Fiona Monkman from the Greater London region proposed the motion attacking the executive:

‘Last year this was the biggest debate at conference. Now we face accelerating privatisation, and the debate is more urgently needed than ever. This is not about disaffiliation. We are proud to be associated with left wing MPs like Jeremy Corbyn. But we need to look at our political arrangements to say we’ll only back those who back us.’

She received wide applause when she said, ‘David Blunkett made racist and poisonous comments on asylum seekers. Yet David Blunkett remains funded by our parliamentary group with absolutely no sanctions against him.’ 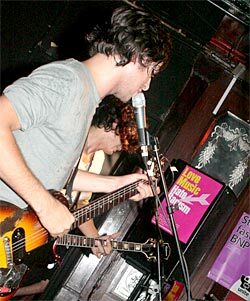 Why is the media on the bosses’ side?