‘They don’t want them to come home. They actually want them to get killed so their stories do not get out.’ This is how Azmat Begg, father of Guantanamo detainee Moazzam Begg, sees the government’s attitude to his son’s plight.

‘Wolfowitz has already offered Blair the Britons back, but Blair didn’t like the idea. He wanted them to be tried abroad. Can you believe that? He doesn’t believe in the law of this country of ours. He wants other countries to punish people. Why are they not letting them have access to lawyers? There is definitely something they don’t want us to know – they must be treating them badly. Bush said the prisoners are animals, not human beings, and that’s how they are treating them. Our prime minister is abandoning people who have done nothing, and who would be freed by courts in this country. They tell us that they have no access to the prisoners, but the British intelligence services were going over there all the time and interrogating them. The children get up at night crying, asking for their dad. Their dreams are terrible, frightening.’

Moazzam was snatched in the middle of the night from his home in Pakistan in February 2002. His three young children and heavily pregnant wife, Sally, were in the house when he was kidnapped. Trapped in the boot of the car in Pakistan, Moazzam called his father using his mobile phone and told him what had happened. That was almost 18 months ago.

‘I didn’t know why he had been taken. I didn’t know what was going on,’ Azmat said. ‘Later on a call came from Afghanistan – a place called Kandahar – and I was told by the Red Cross that he was in the captivity of the Americans. No charges have ever been brought. Before he was taken to Cuba he was held in Afghanistan for one year. He was tortured and deprived of water and food. He only saw sunlight for two minutes in the whole year. I know this from some of his letters, although most are censored. My letters are also censored. I’m just allowed to write, ‘We are all well and we hope you are well.’

‘At first I did not keep his letters because I thought, ‘He’s coming back, it’s nothing serious.’ Now I keep them.

‘Moazzam wrote to Sally saying, ‘I wish my soul would leave my body.’ He also wrote that his nails – on his hands and feet – were being treated now. What is wrong with his nails? Somebody must have been pulling them out. I found out from the Foreign Office that he was being held in Guantanamo Bay this February. At Guantanamo they have solitary confinement and are taken out like animals for only a quarter of an hour a day. And I hear they have children in there and old men. I try to speak to the Foreign Office but there is red tape all around. They never give us any information. They never talk to us. Moazzam and Feroz are British citizens, and it is the duty of the government to bring them to justice. I’m not saying they should just set them free. I’m just asking for justice, and justice cannot be done behind the closed doors of an American army court. Our government and our MPs should stand up and ask for that. There are over 200 MPs who have signed a petition, and I hope there will be more. If there is outrage then the government will take notice of it. Moazzam is not the sort of person who would do anything wrong. They can ask him to say things under duress – which they are trying to do – but that’s not justice.’

The choice is confess or die

Louise explains, ‘Wolfowitz, the US deputy defence secretary, appoints the military judges, the prosecutor and the chief defence council. He has the right to monitor the conversations held between the defence council and the accused. How do you conduct a defence if you can’t get in touch with any witnesses? Under the US system the prosecuting authority enters into ‘negotiations’, although I would call it bullying. If you plead guilty you may get several years, but if you don’t you get the death sentence. So confess and get 25 years or die – that is the choice.

‘Add to this fact that the detainees are likely to be represented by the military wearing a uniform. They have been incarcerated and possibly badly treated by people wearing military uniforms. It really is a breach of every international law. They are being kept in cells 8 feet by 6.6 feet and surrounded with wire mesh with no privacy. The light is on all night. They were allowed 15 minutes at a time twice a day which was used for showering and ‘exercise’. This has now been increased to 30 minutes twice a day, but this includes getting out of the cell in leg irons and showering. They have not been told what’s happening to them. Feroz said nothing for over an hour when he was first visited.

‘There are serious concerns over prisoners’ mental health. Feroz has been interrogated four times – in the absence of a lawyer – by the British with the US present. What he says counts as ‘evidence’ and can be used against him. The third time Feroz was interrogated he asked for a lawyer because he had just been given 17 letters from his mother, held back by the military, telling him she had got him a lawyer. He was refused. The British government is colluding with the US because they have already sent their intelligence services to interrogate prisoners. There are 660 people in Guantanamo Bay with different nationalities. They have places for 1,000 prisoners and are building more prisons.

‘If the US makes an exception for the two British men there may be problems with citizens from other countries. There are worries that if they find young ‘extremist’ Muslim men they will kidnap them, and the more that this happens, the more the sense of injustice around the world will increase. Children are being held at Guantanamo Bay, including one 15 year old Canadian boy. I do not know if my client is innocent because I have not had access to him, and he hasn’t been charged with anything to be innocent of.’

They were first arrested by police at Gatwick airport last November under anti-terrorism laws after a ‘suspect’ device – a battery charger – was found in their luggage. Police released them without charge after an Argos catalogue was produced showing the suspect device was very common.

The men resumed their journey to Gambia with two other men. On arrival all four were arrested by the Gambian secret police. When they asked to see a lawyer or speak to the British High Commissioner, the Gambian agents laughed and said it was the British who asked them to make the arrests.

Two of the men were British nationals and were later freed. But Bisher and Jamil were handed to US intelligence and taken to Guantanamo Bay in March.

Foreign secretary Jack Straw has made it clear that he will not intervene. But Bisher is an Iraqi national, so has no government that can intervene. And Jamil is from Jordan and was given refugee status in Britain last year. 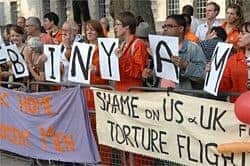