This article is over 17 years, 3 months old
MOAZZAM BEGG, the British law student being held in solitary confinement in Guantanamo Bay, has accused the US military of torture, death threats and illegal abduction.
Downloading PDF. Please wait...
Saturday 09 October 2004

Moazzam Begg, the British law student being held in solitary confinement in Guantanamo Bay, has accused the US military of torture, death threats and illegal abduction.

The claims were made in the first uncensored testimony from a prisoner in Guantanamo. A letter from Moazzam, revealed by his lawyers last week, somehow slipped through the US censorship system.

In the letter Moazzam describes treatment identical to that of Iraqi prisoners in Abu Ghraib. “I was physically abused and degradingly stripped by force, then paraded in front of several cameras toted by US personnel,” he writes.

Moazzam has been kept in isolation for the past 600 days. There is no way he could have known about the Abu Ghraib scandal when he wrote the letter on 12 July this year.

Jamal al-Harith, a former British Guantanamo detainee who was released earlier this year, told Socialist Worker that Moazzam’s letter tallied with his own experience.

“The letter explains itself really,” he said. “And it’s not just photos—they actually make videos of people being beaten.”

Moazzam also describes how he was abducted by US agents in Pakistan, taken to Bagram air base in Afghanistan, held underground for a year and then shipped to Guantanamo Bay.

During his time in Bagram he was tortured, and witnessed the murder of two inmates at the hands of the US military.

“Moazzam Begg is the one British Guantanamo detainee who has not been seen by any of the others,” said Gareth Peirce, the civil rights lawyer who is campaigning for his release.

“This letter makes clear why. He is being held separately from the others because he has witnessed murder. He has evidence of unlawful killing by the US military, and that evidence is clearly being suppressed.”

Gareth Peirce describes the circumstances surrounding the letter’s release as “curious”. She added, “We do not know why this letter came out.

“It wasn’t censored or classified, unlike everything else his lawyers have seen.”

“It’s a very considered and determined letter from someone who’s putting a message in a bottle, hoping someone, somewhere will read it. I suspect it’s maybe the hundredth such letter he’s written.”

Peirce is now demanding that the British and US governments declassify the rest of Moazzam’s testimony and release him from Guantanamo Bay.

“This direct testimony from Guantanamo compels them to do what they have failed to do so far, which is to achieve his return to this country from his illegal captivity in the US,” she said. 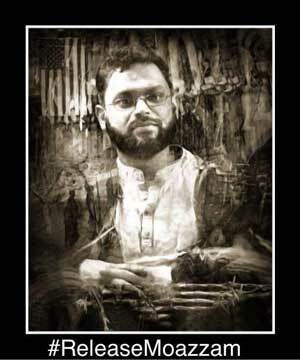