This article is over 17 years, 2 months old
FIREFIGHTERS and emergency control staff are discussing an urgent campaign to stop the closure of one station and the loss of ten appliances across central London.
Downloading PDF. Please wait...
Saturday 06 November 2004

FIREFIGHTERS and emergency control staff are discussing an urgent campaign to stop the closure of one station and the loss of ten appliances across central London.

As if to underline the madness of slashing fire cover, the Labour-controlled authority is proposing to restore engines at ten outer London stations it scrapped in a previous round of cuts. The Fire Brigades Union (FBU) opposed those cuts then, and is vindicated now.

Mick Shaw, a member of the FBU executive council for London, says, “We welcome the reversal of previous cuts at the outer London stations.

“But this should not be done at the expense of the fire cover provided to central London.

“If a decision is made to reverse these cuts in future years, it will be too late for Manchester Square station because it will have been closed and probably converted into expensive residential properties.”

The SOUTH West region of the FBU is to protest next Monday, 8 November, against plans to establish a regional control room, which will mean the closure of local facilities, job cuts and a worse service.

Even most fire authorities and chief fire officers in the area are against the plan.

ABOUT 40 firefighters and their supporters lobbied a council meeting in Birkenshaw on Friday of last week at which the Liberal Democrat and Tory controlled fire authority was proposing cuts throughout West Yorkshire.

Councillors were to vote on the proposals at the meeting, but they were only given the report 20 minutes beforehand.

Andy Imrie, the divisional secretary for the Fire Brigades Union in Wakefield and Five Towns, said that the report had been deliberately withheld from councillors, as reading it would have made more of them vote against.

Some proposals include the closure or merger of fire stations, and cutting back on the number of hydraulic platforms.

There are proposals to send firefighters delivering leaflets to “prevent” fires.

So in the event of a fire they may not be available to deal with it. Andy Imrie asked, “Why don’t they employ extra people to deliver the leaflets rather than taking out the firefighters?

“The meeting was a stitch-up. No firefighters were allowed to speak in the meeting.”

The new issue of Red Watch, the rank and file paper for firefighters and control staff is out now. For more information, or to order copies, phone 07973 521 594 or 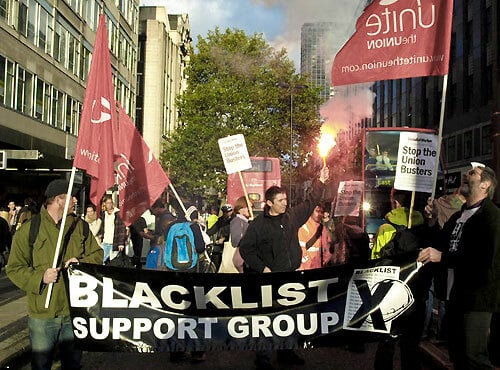 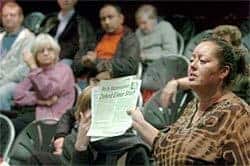