This article is over 14 years, 3 months old
Anti-war campaigner Rose Gentle has reacted angrily to the decision by nine Law Lords to rule against the right to hold a public inquiry over the invasion of Iraq.
By Esme Choonara
Downloading PDF. Please wait...
Tuesday 15 April 2008

Anti-war campaigner Rose Gentle has reacted angrily to the decision by nine Law Lords to rule against the right to hold a public inquiry over the invasion of Iraq.

Rose, whose son Gordon was killed by a roadside bomb in 2004 while serving in Iraq, lodged the case jointly with Beverley Clarke.

Her son David was killed in a “friendly fire” incident in Basra in 2003.

The case for an inquiry centred on the families’ demands for an explanation of how 13 pages of “equivocal” advice from the attorney general about the legality of the war was reduced in less than ten days to one page that clearly argued an invasion would be legal.

While the Law Lords last week unanimously ruled against the case, one of those hearing the case, Baroness Hale, admitted that the legal advice over the invasion was “very far from clear and unambiguous”.

Rose, who is one of the founders of Military Families Against the War, says that the fight for justice will continue.

She told Socialist Worker that she was “disappointed, but not surprised” with the Law Lords’ ruling.

“It is also unacceptable that the government says it will hold an inquiry but only when it decides the ‘time is right’,” Rose added.

The campaign by military families, alongside the Stop the War Coalition, has kept the pressure on the government over Iraq.

It has stopped Gordon Brown from being able to bury the issue.

In a separate case last week, the court of appeal ruled against attempts by defence secretary Des Browne to stop coroners using phrases such as “serious failure” in inquests into the deaths of soldiers killed on active service.

The campaign by military families has also highlighted issues of army recruitment – in particular its targeting of young working class people.

This has boosted campaigns by students and teachers to stop military recruitment in schools and universities.

In recognition of her contribution, Rose was elected as honorary vice-president of the National Union of Students at its recent conference.

For more information about Rose’s campaign go to » www.mfaw.org.uk 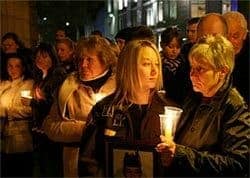 The rise and fall of Bush's favourite Iraqi

Get the troops out