This article is over 11 years, 4 months old
MOX is a nuclear fuel made from a mixture of plutonium and uranium oxides by reprocessing nuclear waste.
Downloading PDF. Please wait...
Tuesday 15 March 2011

MOX is a nuclear fuel made from a mixture of plutonium and uranium oxides by reprocessing nuclear waste.

MOX is more dangerous than other nuclear fuels because plutonium is more reactive than uranium.

The reason for its use is political—it allows countries to look like they are dealing with their stocks of useless plutonium.

MOX is up to five times more expensive than other nuclear fuels.

It produces more waste. And it still involves using a majority of enriched uranium fuel—which in turn creates new plutonium.

Britain is one of the main countries that produces MOX.

It was a British ship that first brought MOX to Japan in 1999—a major scandal for the nuclear industry. 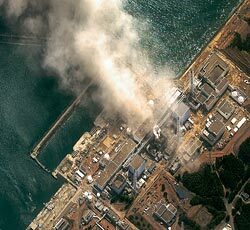 Fukushima - a history of nuclear failure