MPs vote to back Tories’ attack on firefighters’ pensions

MPs have now backed Tory plans to make firefighters work until they are 60 or face losing up to half of their pension.

Firefighters in the FBU union lobbied parliament on Monday of this week as the proposals were put to MPs.

Tory fire minister Penny Mordaunt said workers would not lose their jobs for failing to retain fitness levels past the age of 55. She claimed the government would redeploy them.

But Labour’s John McDonnell, chair of the FBU’s parliamentary group, rubbished this. He said years of cuts meant there are no jobs to be redeployed to.

The vote was lost by 313 to 261. Many firefighters thought they could count on Labour. But its leader Ed Miliband didn’t bother to take part.

As Socialist Worker went to press, the union’s executive council was meeting to discuss the debate.

The dispute is at a critical stage. Only strikes can beat the government. The parliamentary and lobbying routes have been exhausted.

The London region have already passed a motion calling for an eight-day escalation. And many activists in the union have argued to go out over Christmas and New Year. 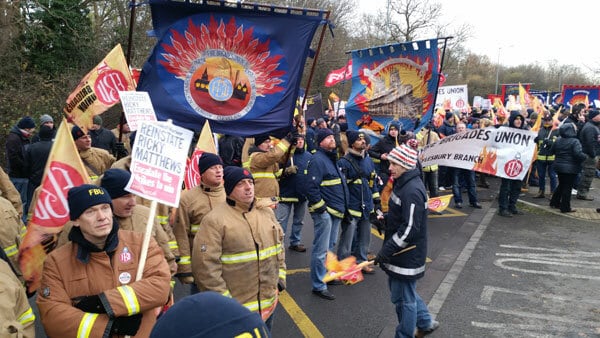