This article is over 20 years, 11 months old
On 5 March the world's biggest pharmaceutical firms are going to court to stop South Africans receiving cheaper AIDS drugs. If they succeed they will pass a death sentence on millions of the poorest people suffering from AIDS.
By Hazel Croft
Downloading PDF. Please wait...
Saturday 17 February 2001

On 5 March the world’s biggest pharmaceutical firms are going to court to stop South Africans receiving cheaper AIDS drugs. If they succeed they will pass a death sentence on millions of the poorest people suffering from AIDS.

The Oxfam charity accuses multinational drug firms and Western governments of ‘conducting an undeclared war against the world’s poorest countries’. Oxfam says expensive medicines already lead to the needless deaths of 11 million people, half of them children, every single year.

Now the giant drug firms want to use the law to stop the South African government making or importing cheaper copies of drugs to treat the HIV virus and AIDS.

Western governments including Britain and the US are backing the drug companies. The multinationals will use the World Trade Organisation’s (WTO) Trade Related Aspects of Intellectual Property Rights (TRIPS) to protect their patent rights for the next 20 years.

These rules put corporate self interest before people’s lives. There will be massive price increases for other lifesaving drugs of between 200 and 300 percent. The next generation of drugs to treat major killers such as malaria, pneumonia, diarrhoea and tuberculosis will also be patented. This would have catastrophic effects, condemning millions of the poorest to early and painful death.

It will hit countries whose health systems have already been decimated by austerity programmes enforced by institutions like the International Monetary Fund.

Oxfam points out, ‘These rules, driven through the WTO by the United States, Europe and Japan, are the product of an intensive lobbying exercise by the world’s largest and most powerful pharmaceutical companies: Merck, Pfizer, Glaxo Wellcome, SmithKline Beecham and Eli Lilly.’

Together the five largest drug companies are bigger than the economies of Mexico and India, and twice the size of the whole of sub-Saharan Africa. Global Last year the top six drug firms raked in £20 billion in profits. In the US alone the pharmaceutical industry made $99.5 billion profits in 1998. Yet only 0.2 percent of the drugs companies’ health related research was spent on pneumonia, diarrhoea and tuberculosis-which account for 18 percent of all global disease, mainly in poor countries.

And just 10 percent of their research was directed towards illnesses that hit 90 percent of the world’s population. The pharmaceutical giants combined together in the Pharmaceutical Research and Manufacturers of America (PhRMA) to push the US government to threaten trade sanctions against countries which produce or import cheaper drugs. The US government has threatened trade sanctions against over 30 countries, including India, the Dominican Republic, Thailand, Argentina and Brazil, at the behest of the drug firms.

Between 1997 and 1999 PhRMA’s members spent $236 million lobbying the US Congress, and in 1999 alone donated $14 million to the Republican and Democratic parties. The multinational drug companies and Western governments will let nothing stand in the way of corporate profits and power. Oxfam’s director, Justin Forsyth, describes their war on the poor as ‘the shadowy side of globalisation’, and calls for an end to ‘bullying by rich countries’.

Sir Richard Sykes is chairman of GlaxoSmithKline. The company was formed last year when Glaxo Wellcome and SmithKline Beecham merged. It is valued at £107.3 billion, employing 100,000 workers across 108 manufacturing sites in 41 countries. Sykes’s salary at Glaxo Wellcome in 1999 was £1,183,000. He also got a £2,434,000 bonus from share sales. New Labour appointed Richard Sykes to its ‘Advisory Group on Competitiveness’. Richard Sykes is rector of London’s Imperial College of Science and Technology. His company has ‘alliances’ with Cardiff University, University of Wales, University College London and Cambridge University.

‘Kindly tell me how come drug companies spend twice as much on marketing as they do on research and development?’
JOHN LE CARRÉ, author of The Constant Gardener, a novel that attacks the drug firms

Oxfam HAS launched a ‘Cut the Cost’ campaign which is targeting the world’s biggest pharmaceutical company, the British-based firm GlaxoSmithKline. It is demanding the company drops its court action against South Africa over the production of cheap medecines. That court case starts in South Africa on 5 March.

Why not organise a protest in your local college or town centre against GlaxoSmithKline on 5 March? Local activists and campaigners could join together to expose the drug companies, which are making a killing from AIDS. 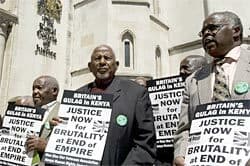