Mursi narrowly wins first round, but struggle will continue

The results from the first day of Egypt’s referendum poll on Muslim Brotherhood President Mursi’s new constitution show a majority of 56.5 percent cast a yes vote.

Cairo, the capital and the biggest city with a population of 20 million, won a majority no vote. The Nile Delta governorate of Gharbiya, which includes the working class industrial area of Mahalla, also voted no.

Next Saturday will see a further 24.7 million vote in the remaining governorates.

The no campaign has seen mass demonstrations on the streets to stop the pro-army and pro-business constitution being imposed in the name of the revolution.

Voters complained about numerous violations. Many people proudly displayed their inked finger proving they had voted, but there were complaints from some polling stations of voters not getting fingers marked to stop them voting twice.

The majority of judges refused to oversee the poll, so Mursi drafted in other individuals with a legal background.

But thousands of voters, suspicious about the lack of real legal oversight and the possibility of fraud, demanded to see the ID of those who sat at polling stations.

“I asked for the judge in my polling station to show me his ID to prove who he was and he refused, yelled at us and snatched my ID card from me,” Dalia Moustafa, a lecturer who had queued for two hours to vote, told Socialist Worker. “I complained to the police.”

Judges were horrified at being asked to show their ID by ordinary Egyptian citizens. This is something that would never have happened before the revolution gave people the confidence to challenge authority.

“But to be in the women’s queue for that time was inspiring,” Dalia added. “This is where you could see this is a women’s revolution. There wasn’t much small talk, there was great political awareness and understanding of the struggle. In terms of women’s rights they feel it’s ‘now or never’.”

Women are active today at a level not seen since the 18 days that brought down dictator Mubarak. This is partly because of the threat the new constitution could open up to the place of women in Egyptian society.

“Whatever happens in the final result, even if the referendum shows a big yes vote, Mursi still faces a serious crisis, “said Sameh Naguib, a leading member of Egypt’s Revolutionary Socialists.

“He faces an opposition that has seen new forces join it. Greater than ever numbers of Christian Copts are now becoming politicised. No Egyptian constitution has been written without Copts.

“Mursi and the Brotherhood have been shocked by the extent of the opposition. They want to denounce it all as ‘feloul’—remnants of the old regime—but this is rubbish. If the feloul could have mobilised these sorts of numbers on the streets then they would have done it to defend Mubarak.

“There has been feloul on some of the protests, and some liberals are working with them, but we have opposed this.”

Mursi and the Brotherhood are losing support at a speed that has taken everyone by surprise.

In desperation, the Brotherhood has unleashed thugs who committed violent assaults on protesters over the last two weeks. This has led some in the opposition to say the Brotherhood is becoming fascist.

“To denounce the Brotherhood as fascist is a mistake,” said Sameh. “There are elements which represent the counter-revolution, and counter-revolutions are violent against workers and activists. But we are not witnessing fascism in Egypt. The working class has not been defeated and the struggle from below is deepening.”

Workers and the poor still have expectations that the revolution will bring them improvements in their life. But Mursi is only promising price rises and austerity, as this is the only way he can get international loans to stabilise the stumbling economy.

The working class has not joined this new wave of struggle as a collective. However, the independent union federation produced two million leaflets on why people should vote no, which explain how anti-working class the new constitution is. These are being given out in workplaces and local communities.

“The mistake Mursi has made is that he has shown the sort of attacks he would like to do,” said Sameh. “Huge price rises on cigarettes and closing city shops at 10pm, for example. But he wasn’t strong enough to push them through.

“So before the referendum he dropped the price rises, but he will come back to them once the polling is over.”

“This will lead to more struggles. The constitution can’t stop this process.” 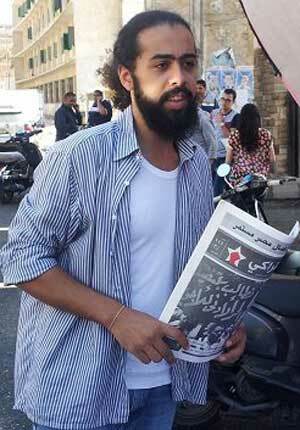 Revolutionaries in Egypt take a stand against army repression