My four days inside Mugabe’s prisons

This article is over 16 years, 1 months old
I was among 120 people who were arrested on the Zimbabwe Congress of Trade Unions (ZCTU) led Action Against Poverty demonstration in Zimbabwe's capital, Harare, on Tuesday 8 November. Hundreds of people had protested against spiralling levels of poverty.
By John \'Briggs\' Bomba, International Socialist Organisation (ISO), Zimbabwe
Downloading PDF. Please wait...
Saturday 26 November 2005

I was among 120 people who were arrested on the Zimbabwe Congress of Trade Unions (ZCTU) led Action Against Poverty demonstration in Zimbabwe’s capital, Harare, on Tuesday 8 November. Hundreds of people had protested against spiralling levels of poverty.

Those arrested included township women with babies on their back (the youngest only six weeks old), the disabled on crutches, HIV positive people demanding access to antiretroviral drugs, workers demanding a living wage, unemployed youth and other activists. We spent a nightmarish four days and three nights behind bars, in conditions not fit for wild dogs, for raising banners demanding food and water.

The following is my testimony.

The demonstration showed a new confidence to fight back. The hundreds that gathered at Construction House and marched defying the heavily armed police showed that Zimbabwe’s poor are sick and tired of worsening conditions of poverty. No one ran way at the arrival of heavily armed, mean looking riot police. We resolved to sit down and continued singing and chanting slogans in defiance. When we were arrested we all boldly lined up to get onto the trucks, with men helping women who had babies and the disabled. The police turned away some of the disabled people in wheelchairs who had also lined up to be arrested.

The senior cops were clearly angry at our self assured and confident response and one of them assaulted ISO comrade Munyaradzi Gwisai with a baton. Munyaradzi was obviously targeted as one of the key leaders present. Still people were not cowed.

The singing continued and got louder while we were being driven to the police station — people on the street waved back in solidarity. It was an inspiring act of defiance, a clear signal that the masses are beginning to wake up and punch back. Other comrades, including disabled people on crutches, followed all the way to the police station demanding to be arrested. The police were so embarrassed that they turned away twenty disabled people who had handed themselves in. The Zimbabwe Social Forum (ZSF) chairman Regis Mtutu was among those arrested at the central police station.

The police were clearly shocked by the solid determination of the protest. This is a sign of the times. A new wave of mass struggles has been announced through recent actions by the National Constitutional Assembly, students, Women of Zimbabwe Arise (Woza) and critically the ZCTU. The militancy and energy that characterised the Southern Africa Social Forum is now translating into mobilisation and action. The ZSF constituencies, particularly the HIV/AIDS cluster, the youth and people living with disabilities played a decisive role in the ZCTU action.

Zimbabwe’s crisis has reached breaking point. The country is writhing in a severe neo-liberal crisis presided over by a besieged authoritarian regime. Throughout recent actions and the thorough discussions held in the cells leftists ideas were quite popular with the Zimbabwe Social Forum and ISO comrades in particular played a key role in articulating an anti-neoliberal ideological line.

Arriving at the station we were ordered to line up at gunpoint. We were harassed into stinking filthy cells, infested with bed bugs and lice. The police were clearly overwhelmed by the large numbers. The simple procedure of taking down our details took forever. The cops were also clearly demoralised and looked disinterested.

It’s becoming more and more obvious that junior officers are cracking and coming to sympathise with the poor masses. The fact is that junior police officers suffer like all of us. They get peanuts while police chiefs own farms, drive the latest cars and are getting fatter by the minute.

On the first night of detention our lawyers had to fight to get us fed, as some officers wanted to starve us. The police chiefs insisted on feeding us prison food, which they would not give to their dogs.

Sometime after 9pm a new ordeal began. We were ordered onto a lorry, packed in tightly like grain sacks, while a group of tired farm worker or war veteran looking guys in overalls and worksuits pointed AK-47 assault rifles at us. We were kept in the dark as to where we were going — throughout our imprisonment such mystification remained a key weapon the police would use to torture us.

We were taken to Makoni central police station in the town of Chitungwiza, south of Harare. Here we were detained from Tuesday evening to Friday evening. Chitungwiza hasn’t had running water for three months, so we were detained at a place that had no water and no working toilets. We were packed in tiny cages like rats. There wasn’t room for everyone to sit down, so we took turns.

Both the women’s and man’s cages had no toilets, so we were given 20 litre plastic buckets to use, which filled up in no time. The cruel, stupid and overzealous cop on duty refused to let us empty them. The whole night we called on deaf ears. By morning, as urine was flowing to where people were seated, the stupid officer continued to ignore the situation. We threatened to sue him personally for his cruelty but he was still unmoved. The same officer even had the audacity to deny drugs to HIV positive prisoners.

Despite all this our fighting spirit remained high. Comrades kept singing revolutionary songs and toyi toying till the whole building shook. We turned each cell into a rally, with speech after speech showing defiance to the police, who were clearly looking scared. We had petty criminals in the cells vowing to join the struggle as soon as they were released. We were resolute that the movement will not go away until our demands are met.

They were basic demands that even the dullest policeman could see were justified: antiretrovirals for people living with HIV, a living wage for workers (including police officers and soldiers), affordable sanitary pads and baby milk, water for our townships, food for our hungry families and education for our children. We were also demanding that the government immediately stop all payment to the IMF and use the scarce foreign currency to buy basic necessities.

I am one of those who were called for special interrogation by the intelligence forces and insisted to them that our struggle is about defending life itself, a cause we can’t abandon until total victory.

Our singing, toyi toyi and speeches were clearly getting on the nerves of senior police officers and a number of times they tried to shut us up. Whenever they banned us from singing, someone would break into a revolutionary prayer or begin storytelling. By the end we would all be singing again.

The police decided to split us into the smaller filthy cells that had been disused because they were not fit for human habitation. We successfully resisted a number of attempts to move us and the senior officers had to call in the riot police to forcefully move us. The fact that the riot police had pitched two tents in the grounds of the police station and were keeping a 24 hour armed guard shows how much the regime had panicked.

My group was put into a tiny cell that apparently had the only toilet that had not yet blocked. We had agreed to allow no solids in the toilet since there was no running water. However every few minutes the cops would bring people who had diarrhoea. By dawn the sewer had burst and it was stinking and flowing to where people were sleeping. We called and called, but the cops were no help. They put on breathing masks to come to the cells but apparently they expected us to enjoy ourselves.

After the demonstration the regime was in a panic mode. The army was unleashed onto the streets randomly harassing people and they cordoned off parts of town, creating no go areas. In the evening police went on a scorched earth style round-up of street kids, vagrants, vendors and prostitutes. Close to 200 of these were brought to Makoni police station where we were detained. The regime is afraid that these people living in the most desperate of conditions will join up with those who are fighting back. Their strategy is still to preemptively crush and lock up these people before they start rioting. The challenge for progressive forces is to bring everyone who is suffering into the fight.

We were already overcrowded before the arrival of this new group and the situation became totally horrendous. People were piling on each other like sacks. Those rounded up from the streets included children (one a three-year-old) and they had to struggle for space in cells that included senile vagrants. Quite a number of those who were detained were workers on their way home who were mistaken for people living on the streets. These people had no food or drinking water and no toilets. One of the kids actually fainted.

The situation was unbearable and calls for a serious investigations into Zimbabwe’s prisons. If people who have not been convicted of any crime could be put through this what about convicts? Such gross human rights violations can’t be allowed to continue. The whole world needs to take a stand against such abuses.

Whilst detained we came face to face with base police corruption. Truckloads of goods would come in from the raids on vendors. The seized goods included vegetables, eggs, fruit, chickens and clothes. We saw the police sharing these out right in front of our eyes. They would put some of the food in the officers’ mess. The nation deserves an explanation from police commissioner Chihuri and the Minister of Home Affairs. We can’t have police looting from poor vendors who are desperately trying to survive an acute economic crisis.

Now that we have been released, we are already mobilising for the next action to coincide with the world AIDS day on 1 December. This year’s theme is ‘Stop Aids. Keep the promise’. We have resolved to quadruple the number of those arrested in the last action, so Mugabe must make room in his cells for at least 500 people. The solidarity we got from local and regional comrades was powerful. The e-mails, faxes and phone calls kept the regime on its toes. We extend yet another call to comrades in the region for solidarity with the poor masses of Zimbabwe when we rise again.

Lets get free or die trying! 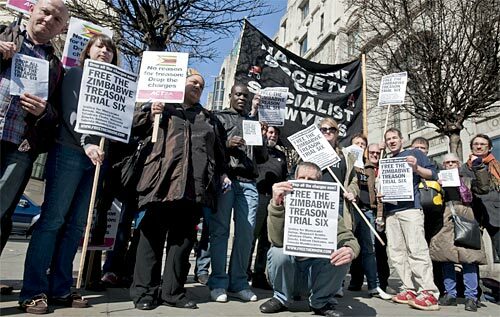 Zimbabwe socialists released on bail - but the campaign goes on 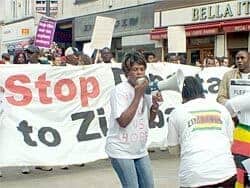 Refugees from Zimbabwe protest against deportations

Hunger striker: ‘I’ll die rather than go back to Zimbabwe’