This article is over 9 years, 5 months old
Construction bosses are trying to turn back the gains made by rank and file electricians.
Downloading PDF. Please wait...
Tuesday 07 August 2012

Construction bosses are trying to turn back the gains made by rank and file electricians.

And thousands of construction workers have been laid off while the Olympics take place. Some subcontractors clearly intend to rehire on lower pay rates.

At the same time bosses at Ratcliffe on Soar have got rid of Unite union health and safety rep Jason Poulter. It was their second attempt after an unofficial strike of 600 workers won Jason’s job back.

But Spie Matthew Hall workers on site decided against coming out this time. This is partly due to falling numbers as the job comes to an end.

Talks continue on wages and the rest of the agreement on a national level. There is little indication of when they will end and with what result.

It is a year since the magnificent rank and file meeting in London that launched the campaign to beat the bosses’ Besna agreement.

A national rank and file meeting in Conway Hall this Saturday is an important opportunity to kickstart a campaign against the continuing onslaught against construction workers.

The Blacklist Support Group and Unite Scottish Sparks rank and file group have called a protest against Balfour Beatty’s blacklist. 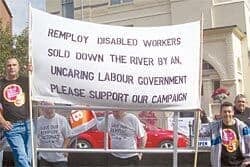