This article is over 19 years, 10 months old
Postal Workers will hold a national demonstration in a week's time. Thousands will march through London protesting at plans to hand over the mail to private firms. This is a great chance to take the anger against privatisation and the rundown of public services onto the streets.
By Charlie Kimber
Downloading PDF. Please wait...
Saturday 09 March 2002

Postal Workers will hold a national demonstration in a week’s time. Thousands will march through London protesting at plans to hand over the mail to private firms. This is a great chance to take the anger against privatisation and the rundown of public services onto the streets.

The government appointed postal regulator plans to allow private firms to grab almost half the mail in Britain from April. He is worried about resistance. He told the Financial Times, ‘I don’t think we are going to stand absolutely rigid if we are presented with good reasons for changing our minds’.

But the signs are that at best the privatisation plans will be introduced over a longer period, not dumped completely. That is not enough. As the chief executive of one of the private firms looking to take over the post said: ‘If the timing was pushed back it would be an irritant, but it would not be the end of the world. We are in a marathon, not a sprint.’ If postal workers fight, the issue could become a deep political crisis for the government.

Millions of people hate what happened over Railtrack, and they do not want a Mailtrack. Some 150 MPs have already signed a House of Commons motion attacking the regulator’s plan, almost all of them Labour. They include mainstream Labour figures such as Kate Hoey, Chris Smith, Ashok Kumar, Tony Worthington, Anne Begg, Chris Mullin and Peter Kilfoyle. Union leaders have repeatedly delayed calling a strike over pay, despite a massive vote for action. They were meeting this week to consider another offer.

Postal workers can give a powerful focus to the feeling among millions of workers that there needs to be resistance to privatisation, low pay and the relentless pressure from management.

Two Post Office bosses were forced to refuse a big rise this week, even though New Labour sanctioned the increase. They were set to grab a huge 10 percent while offering just 2 percent to workers. Chief executive John Roberts gets £205,000 a year basic plus £11,000 in extras. He was in line to pocket another £21,000.

The same kind of rise was offered to Jerry Cope, the head of mail services, who already gets £140,000 a year. Outrage swept post offices and depots across Britain. Roberts and Cope were forced to say that workers’ pay was the priority. Yet these same men throw up their hands in horror at the thought of ordinary postal workers getting a 5 percent rise.

This retreat shows the management is scared of what would happen if they sneeringly waved £20 notes in workers’ faces. Union leaders were meeting this week to consider the latest pay offer. They have already delayed too long. It is time for action over pay, privatisation and jobs.

As revealed in Socialist Worker two weeks ago, Royal Mail is to begin trials of its new delivery scheme. In 13 areas there will be an early delivery for business users, with a delivery as late as 1pm for the rest of us. It could also lead to huge job losses. The union should defend second deliveries, and refuse to agree to changes which hit jobs, conditions or earnings.

NO PRIVATISATION – KEEP THE MAIL IN PUBLIC HANDS 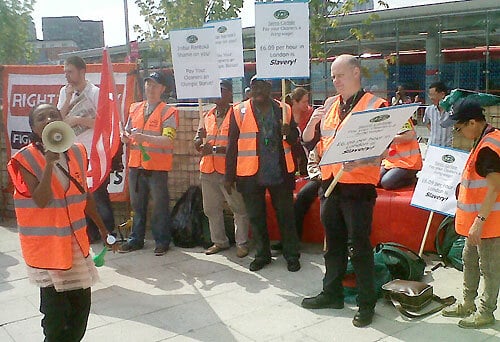