This article is over 12 years, 10 months old
Thousands of journalists in the BBC are poised for strike action after workers voted for two one-day strikes against attacks on jobs and conditions.
By Siân Ruddick
Downloading PDF. Please wait...
Tuesday 24 March 2009

Thousands of journalists in the BBC are poised for strike action after workers voted for two one-day strikes against attacks on jobs and conditions.

Workers in the NUJ union in regional and national operations were balloted, and there was a 77 percent vote for action.

They are fighting to save 20 jobs under threat at the World Service and to protect workers from further cuts.

The strike days are set for Friday of next week and 9 April. The strike will hit BBC centres across the country and have a significant impact on broadcasting. It will send a clear message to management that compulsory job cuts will not be taken lying down.

Becky Branford, joint mother of the chapel [workplace union rep] at BBC News Interactive, told Socialist Worker, “Management are using the economic crisis as a stick to beat workers with.

“The BBC has a privileged position and has a guaranteed income from the licence fee. But that doesn’t stop it cutting jobs and standards.

“We’re almost certain that director-general Mark Thompson is going to announce more job cuts. That’s why we have to fight over these 20 compulsory redundancies at the World Service.

“The ballot vote was strongly in favour of strike action and there’s been lots of discussion about where our campaign is going. People are feeling quite defensive at the moment, so we have to work on their confidence.

“We also need to talk about wider issues, such as the content of the BBC.”

This strike comes at a time when jobs are being slashed across the local and national media, in broadcasting and in print.

NUJ members at the Yorkshire Post have taken over two weeks’ worth of strike action against 18 planned job cuts. Workers were to hold a chapel [workplace union branch] meeting on Wednesday of this week to plan their next step.

The NUJ has said it will also ballot members across the Guardian Media Group based in Manchester, where workers have been told that 150 jobs will be cut.

The losses include 39 at Manchester Evening News and others at regional papers owned by the group.

Management claim that they are cutting regional jobs to save jobs at the national titles of the Guardian and the Observer. Workers believe that these are divide and rule tactics.

Journalists at the national titles have passed a motion supporting their fellow trade unionists in whatever action they choose to take to protect their jobs.

The crisis in journalism is growing. Northcliff Media, which is owned by the Daily Mail, announced over 1,000 job losses this week.

A consultation with the government on the future of regional papers was to take place this week. The announcement of the consultation came just one day after the NUJ held a lobby of MPs to demand that something is done to save local press.

Guantanamo hunger strike is in its second month 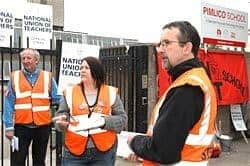