KOSOVO’S THIRD largest city, Mitrovice, has erupted in violence between Serbs and Albanians. NATO secretary general George Robertson and most Western commentators have blamed the Serb inhabitants of Mitrovice, in northern Kosovo, for the renewed fighting.

But the sharpened ethnic conflict is a direct result of NATO’s 78 day bombing campaign in the Balkans last year and the eight month old occupation. The current outbreak of fighting in the city began on 2 February. A group of Albanians fired a rocket at a bus carrying Serbs, killing two old age pensioners. The day after, two Albanians were shot dead and grenade attacks on two Serb-run cafes injured 25 people.

A gang of Serbs attacked Albanians in a block of flats a few days later. Ten Albanians were killed and 1,500 left their homes in the north of the city as a result. Two weeks later 60,000 Albanians marched on Mitrovice and tried to break into the Serb area. NATO commanders portrayed themselves as stuck between two warring sides. But murderous divisions between Serbs and Albanians in Mitrovice have been encouraged by NATO’s actions. Mitrovice used to be a mixed city. An Albanian majority lived alongside Serbs, Roma Gypsies and other minorities.

The Serbian government of Slobodan Milosevic discriminated against the Albanian majority in Kosovo throughout the 1990s. NATO’s bombing campaign last year provided the pretext and the cover for Serbian paramilitary forces to drive hundreds of thousands of Albanians from their homes. Then, when NATO occupied Kosovo in June, the Serbs were driven from their homes. Albanians returned to the city. Some set upon the Serbs and other minorities, forcing them to flee.

At the height of the war George Robertson, then the British secretary of state for defence, said his aim in Kosovo was “NATO in, Albanians back, Serbs out.” Albanian gangs set fire to the Roma Gypsy quarter of Mitrovice. Mitrovice’s Serbs either left Kosovo altogether or clustered in the north of the city. Albanians occupied the south. The river Ibar separated 9,000 Serbs from 90,000 Albanians.

The “ethnic cleansing” against Serbs is a mirror image of what Serbian paramilitaries inflicted on Albanians during the war. The 60,000 Albanians who marched on the Serb enclave in Mitrovice last week chanted, “Mitrovice is the heart of Kosovo.” Last year Serbian nationalists who wanted to keep hold of Kosovo by force raised the slogan, “Kosovo is the heart of Serbia.” Mitrovice-and indeed Kosovo as a whole-has become an embarrassment for NATO leaders. They said they would rebuild a “multi-ethnic Kosovo”. But over half the pre-war Serb population has been forced to leave.

It is little wonder why. NATO knew that none of the Serb minority would feel protected by the forces that had just bombed them. Western governments have set up their own administration in Kosovo. It excludes Albanians and Serbs from decision making and resembles a colonial government. Hundreds of millions of pounds promised by the West for reconstruction in Kosovo has not arrived.

NATO is making up for that with a policy of divide and rule. During the war it allied with the Albanian Kosovo Liberation Army (KLA). KLA units have attacked Serb civilians. Rival leaders are now trying to get control of lucrative posts in the West’s administration. Former KLA fighters dominate the Kosovo Protection Corps. Not one Serb is a member.

NATO is working with Albanian forces who want to drive the remaining Serbs out of Kosovo. But it is trying to preserve the pretence of a multi-ethnic state. So it simultaneously boosts those who are attacking Serbs and is forced to confront them. Milosevic is using the plight of the Serbs of Mitrovice to boost support in Kosovo, Serbia and neighbouring Montenegro. The sanctions the West imposed on Serbia have strengthened his hand.

Former KLA commanders are launching attacks inside south eastern Serbia. NATO commanders fear the fighting in Mitrovice could trigger a wider conflict. Bill Clinton and Tony Blair promised NATO’s action would bring peace to Kosovo. Socialist Worker predicted that the war would deepen divisions, lead to new waves of ethnic cleansing and unleash further fighting which could spread across the Balkans. Events in Mitrovice are tragically confirming those predictions. 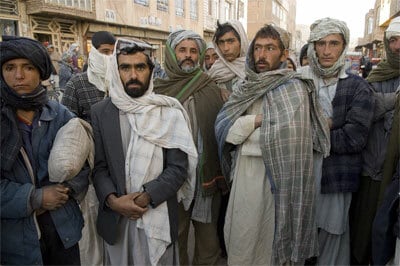 Jobless, displaced and bitter—life inside the West’s occupation of Afghanistan