This article is over 19 years, 3 months old
DAVID BLUNKETT, the home secretary, kept up his attacks on refugees as the Nationality, Immigration and Asylum Bill went to the House of Lords for its third reading this week.
Downloading PDF. Please wait...
Saturday 12 October 2002

DAVID BLUNKETT, the home secretary, kept up his attacks on refugees as the Nationality, Immigration and Asylum Bill went to the House of Lords for its third reading this week.

Blunkett plans to add new attacks on asylum to the bill. These could include ruling that ten new countries about to join the European Union are ‘safe’ and therefore refugees will not be accepted. Yet these countries’ populations include tens of thousands of Roma who suffer persecution. Blunkett also wants to deport asylum seekers before they have even had a chance to appeal.

THE GAP between directors’ pay and workers’ wages has widened in five years of New Labour. The gross earnings of chief executives in Britain’s top 100 companies, including salary, benefits, bonuses and long term incentive payments, rose by 89.3 percent between 1996 and 2001.

EVERY secondary school will be forced to bring in private firms for any rebuilding or refurbishing work, according to new government plans. Schools standards minister David Miliband will hand 3,780 schools’ building and maintenance programmes over to private firms in a PFI deal.

New Labour is trying to bully schools into accepting PFI by saying they will not get the decent buildings they need otherwise.

THE NATIONAL Farmers Union has launched legal action to block the decision by the agricultural wages board to raise farm workers’ pay by 3 percent. These rich farmers are the people who marched recently for ‘liberty and livelihood’.

The NFU resigned from the board in August on the grounds that £4.91 an hour was too much for rural workers. 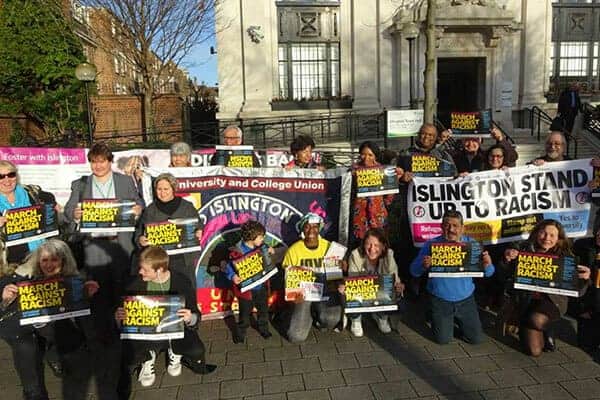 A tidal wave of lies about refugees

Why I support campaign