Socialist Alliance on the move

TONY BLAIR has put the general election on hold until 7 June, but the socialist campaign is steaming ahead. The campaign is winning support from people who have long been loyal to Labour but are now backing a socialist challenge to New Labour.

Chesterfield has for many years been the parliamentary seat of the left wing Labour MP Tony Benn, who is retiring from parliament at the general election. The fight is on in the city to continue the socialist tradition that Benn stands for.

As the local Peak FM radio put it, “If you want a chance to vote for a socialist like Tony Benn then you can vote in the general election for Jeannie Robinson, who is running for the newly formed Socialist Alliance.” Jeannie works as a lecturer in primary education, helping train the people we need to give our children a decent education, and is a well known socialist campaigner in Chesterfield.

New Labour has insulted the tradition that Tony Benn has represented in Chesterfield by picking Reg Race as its candidate. Few local people have ever seen Race involved in any campaigns in the area. His main local claim to fame is that he moved a motion at a Labour Party meeting backing the expulsion of left wing MEP Ken Coates from the Labour Party a few years ago.

The area around Chesterfield has been hit hard by the rundown of the coal mines. There has been a wave of new job losses in the area. The government stood by and allowed the St Gobain multinational to axe 700 jobs by shutting down the Biwater pipe factory in Clay Cross. Now hundreds of jobs are under threat at both the Stirling tubes and Dema glass factories.

At Dema 110 jobs have already gone and another 400 are under threat. Andy Parkes is an AEEU union steward at Dema and a former key local Labour Party member. He is backing the Socialist Alliance: “When John Smith was alive the policies of Labour were more socialist. But when Blair and Mandelson came in and got rid of Clause Four I realised it was time for me to go. There is lot of discontent with Labour, and a lot of people who feel like me, and a good many might decide to vote for the Socialist Alliance. Basically what we have is a Labour government betraying working class people, and that sticks in my craw. That’s where my anger is coming from.”

On a recent Socialist Alliance stall in the centre of Chesterfield that feeling came up time and again. Ian Rutherford worked at Biwater in Clay Cross: “I can’t understand how a Labour government in a Labour stronghold can stand by and let 700 jobs go. Who’s running the country, a Labour government or big business?”

Keith Milliner came into Chesterfield from Bolsover to help out on the Socialist Alliance stall. “I was in the Labour Party,” said Keith. “I’m 59 and an ex-miner. I worked in the pits for 33 years. Tony Blair says there are jobs around. Well, there are 3,000 people on the dole in Bolsover, and there are no jobs.”

John Nuttall lives in Clay Cross just outside Chesterfield. He is a former Labour councillor in North Derbyshire and a well known local figure: “Four years of a Labour government! You can’t believe it-the sleaze, and that they are spending less of the country’s wealth than the Tories on health and education. And the way Jack Straw and Tony Blair have treated refugees is worse than the Tories-absolutely appalling. Blair talks about ‘bog-standard’ comprehensive schools. The truth is we’ve got a bog-standard government, and bog-standard MPs and ministers. The Socialist Alliance gives people an alternative.”$ Ken Loach to direct election broadcast

AWARD-WINNING socialist film director Ken Loach has agreed to make the TV election broadcast for the Socialist Alliance. The Alliance has already selected 88 prospective parliamentary candidates, meeting the 88-candidate threshold for a broadcast set by the BBC and ITV. In Scotland socialist film actor Peter Mullen will be helping make an election broadcast for the Scottish Socialist Party, which plans to contest all 72 parliamentary seats in the country.

Mullen starred in Ken Loach’s film My Name is Joe. Loach, who has made a string of powerful films from Kes to Land and Freedom, is enthusiastic about the socialist challenge to New Labour: “I think it was a very positive and constructive move for all those people who opposed the right wing drift of Blair’s government to come together to make a coherent critique from the left. I think it’s something really new in British politics. Suddenly there’s a coherent voice of the left to oppose the right wing Labour and Conservative parties.” 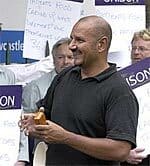 Insanity of the market