This article is over 15 years, 4 months old
In the same week that the big five banks announced profits of £40 billion, the government released a report that targeted lone parents and disabled people as the main problems in society.
By Kelly Hilditch
Downloading PDF. Please wait...
Saturday 10 March 2007

In the same week that the big five banks announced profits of £40 billion, the government released a report that targeted lone parents and disabled people as the main problems in society.

The report, by former investment banker David Freud, lays out plans to get 1.3 million people off welfare and into work.

This is in spite of the fact that officially there were only 607,900 job vacancies at the start of this year.

The government’s proposals are clearly not about helping people but about intimidating some of the poorest and most maligned people in our society.

The two main thrusts of the government’s proposals follow a line favoured by much of the right wing media – to get so-called “scroungers”, namely lone parents and those on

John Hutton, the secretary for work and pensions, said that “the status quo is not defensible”.

He’s right. It’s a disgrace that we live in a society where five banks can make profits that are more than the economic output of Kuwait, but we cannot afford to support those who need help the most.

The government plans to make lone parents look for work when their youngest child is 12, “with further reductions in the age of the youngest child to follow”.

There will also be cuts in benefits if parents cannot prove that they are “seriously” looking for work.

Chris Pond, director of One Parent Families, said, “It would be a real mistake to start cajoling lone parents, even those with older children, into jobs when it’s just not right for them.

“Most lone parents with older children are already working. About 70 percent already have a job. Those who are not working very often have good reasons for not doing so.”

The second attack is on disabled people – those on incapacity benefits.

Freud’s report is not explicit on this. But moves are likely to force people to work if they are now deemed able, as do more stringent tests before people can claim.

The report argues for the privatisation of public services, which New Labour has pushed during its time in office.

Freud concludes that, “There are clear potential gains from contesting services, bringing in innovation with a different skill set”, adding that outsourcing will create an “annual multi-billion market”.

This is even though Freud admits that “there is no conclusive evidence that the private sector outperforms the public sector”.

The report comes as the PCS civil service workers’ union is campaigning against 30,000 job cuts, privatisation and low pay in the department for work and pensions.

Mark Serwotka, the PCS general secretary, said, “These privatisation plans are a slap in the face for the dedicated job centre staff who have successfully delivered the New Deal and the lowest unemployment in a generation.

“You have to question whether it is right to introduce the profit motive into getting people back to work.

“The government should be looking at giving Jobcentre Plus staff the opportunity to build on their success rather than blindly turning to private and third sectors.” 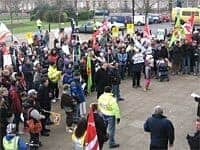