New Labour give way to the right

New Labour give way to the right

MPs HAVE packed their bags. Their luxurious three month long summer holiday has begun. But although “official politics” may now go quiet, the run up to the next general election is under way in earnest. And the appalling truth is the Tories are no longer the joke they once were.

They have discovered a series of issues with which they can put Labour on the defensive-asylum seekers, law and order, Section 28. Although the hysteria around paedophilia may have been initiated by the News of the World-edited by someone close to New Labour (see page 11)-it fits into the pattern of issues being exploited by the Tories.

The government’s response has been both pathetic and shameful. Take Home Office minister Paul Boateng who responded to the News of the World last week. Did he condemn how its publication of the names and photos of convicted child sex offenders has directly led to physical attacks on innocent people? Did he condemn the way its campaign has encouraged other tabloids to follow suit-like the Sunday People whose headline last weekend was “HANG THEM”.

No, Boateng conceded the argument. He said, “The disclosure of offenders’ names is appropriate in some circumstances. There are instances when schools, local authorities and parents need to know if there are released offenders in their neighbourhood. We have to put regulations in place that allow police to do just that.”

On the issue of school exclusions, Labour’s response is just the same. The Tories demand more exclusions. A few weeks ago William Hague even said he would allow pupils to be expelled for not wearing a uniform. This week New Labour announced it would give more power to head teachers to exclude pupils and that it would slash any right to appeal. It has told appeals panels not to reinstate pupils who “flout school dress codes”.

The government memos leaked in recent weeks show beyond doubt that New Labour’s strategy is to concede ground to the Tories. But this is not just because of its electoral calculations. Leading figures in the cabinet at least half agree with the Tories on these issues.

Just look at the advisers appointed by the government. Right wing Mail columnist Simon Heffer, who describes refugees as “thieves, muggers and con men polluting our streets”, now advises Jack Straw on his prison sentencing policy. Heffer is using his new position to call for a restoration of capital punishment. Sir John Birt, former director general of the BBC, is a “special adviser” on crime with the task of dealing with “loutish” behaviour.

And the Observer newspaper last weekend reported that a member of a hardline Christian group acted as an adviser for the government’s sexual offences review report. The result of Labour’s approach is that very real problems, even on these issues never mind on many others, do not get addressed.

So Blair glorifies being a “family man” and puts “family values” on a pedestal. And nobody in the government mentions that the vast majority of child sexual abuse takes place inside the family, or that Home Office figures show that less than 2 percent of paedophiles reoffend within two years. The run up to the next election looks likely to be dominated by a Labour government, still with a huge majority in parliament, conceding to right wing arguments.

This reinforces the disappointment that millions feel with New Labour. And it only works to the benefit of the Tories. 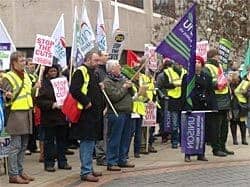 The anti-cuts movement is on the rise

Union defiant in face of threats

United against a two-tier NHS