New Labour plan to work us to death

This article is over 16 years, 0 months old
The government’s new pension plans mean that everyone currently aged 47 or younger will have to work longer before claiming a state pension.
By Charlie Kimber
Downloading PDF. Please wait...
Saturday 03 June 2006

The government’s new pension plans mean that everyone currently aged 47 or younger will have to work longer before claiming a state pension.

Last week the government issued a White Paper which sets out its response to the report by Lord Turner. The key move set out by New Labour is, as expected, a big rise in the state pension age.

The new ages will, according to official government statistics, mean people working well past the age at which they should have retired.

Three months ago, the parliamentary office of science and technology released a briefing on healthy life expectancy.

It showed that general healthy life expectancy – years lived in good health – for men is now 68.8 years, and for women 67.7 years.

These are averages. The majority of working people, especially manual workers, have lower healthy life expectancies.

As the government’s briefing points out, “Those in the richest 10 percent of electoral wards have 16.9 more years of healthy life expectancy than those in the poorest 10 percent.”

Such statistics demonstrate that, if the pension age rises, the poorest will have a healthy life expectancy of around 59, but will have to do another nine years after that before they receive their pension.

Of course many will die before they get any money, or get sick and face further humiliation under Labour’s coming welfare “reform”.

The “sweetener” for these reforms is the restoration of the link between future state pension increases and rises in average earnings, “probably” from 2012 but only if it’s “affordable”.

But this offers nothing for today’s pensioners and, because the state pension has been so eroded, will generate very little extra.

The government will also introduce a National Pensions Savings Scheme from 2012. It will be administered by private firms.

Workers will be automatically enrolled, but will get a brief opportunity to opt out.

Employees will have to pay 4 percent of their salary into the new pension scheme. Employers will contribute 3 percent, while the government will contribute 1 percent in the form of tax relief.

An employers’ rate of 3 percent will not provide an adequate pension for the low paid, especially part time women workers.

In truth the proposals are both a fundamental assault on workers’ living standards and a further move towards a “three mortgage future” under Labour.

Young people are faced with the prospect of one mortgage to get a house (because council housing is so scarce), one to pay off debts accumulated while studying at college and a third to prepare for their retirement.

If they fail on any of these then the prospect is poverty.

Yet the general response from the union leaders was to offer “two cheers” for the White Paper. They welcomed many aspects of it while making ritual noises against the rise in the pension age.

There was no sense of urgency about a fightback.

The Amicus union concluded, “The White Paper takes some big steps towards improving future pension provision and its thrust is therefore to be welcomed.”

TUC general secretary Brendan Barber said, “We welcome this progressive White Paper. Ministers can be proud of a document that looks like it can be the foundation of a new pensions settlement.” 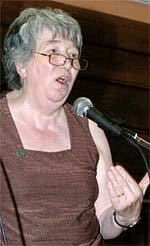 Pensions White Paper will do nothing to tackle our poverty