Blair said he’d govern for ‘the many, not the few’. This is

‘Inequality was higher in 1999-2000 than before Labour came to power.’ Institute of Fiscal Studies

The authoritative Institute for Fiscal Studies has shown that under New Labour the rich have done better at the expense of the poor. The incomes after tax of the richest fifth of the population have grown twice as much as for the poorest fifth.

“Labour has sought to tackle the problem of pensioner poverty by building a pension system that relies more and more on means-tested gimmicks. It is reluctant to give large across the board increases in the basic state pension.”

PENSIONERS ARE suffering needlessly because New Labour has refused to restore the link between the basic state pension and earnings, which Margaret Thatcher broke.

Instead New Labour’s gimmicks mean pensioners get far less, and have to go through demeaning and complicated means tests. Its overall plan is to destroy state provision and push people to rely on “stakeholder” private pensions. That means people who have worked all their lives will be prey to the wild swings of the stock market in retirement.

“Bog-standard comprehensives.” That insult earlier this year summed up Blair’s attitude to the schools where working class children (but not his own) go. New Labour has kept all the divisive Tory policies on education and introduced more. Its latest plan is to create a two-tier education system through selective “specialist schools”.

Private companies are now making a profit out of children’s education, and the government promises more privatisation. New Labour is spending even less of Britain’s wealth on education than the Tories did-just 4.5 percent of economic output last year compared to 5.9 percent under John Major.

Class sizes are rising for all children except in their first three years at school. The introduction of tuition fees and abolition of grants are piling debt on students, and forcing working class students to drop out of university.

NEW LABOUR has introduced a law that labels people who support struggles in other countries against tyranny as terrorists. Had it been in force in the 1980s, any campaigner against apartheid in South Africa could have been arrested for agreeing with the “terrorist” Nelson Mandela.

The right to trial by jury has been restricted. So too has legal aid. The prison population is rising, along with the profits of the private companies which are increasingly running them.

Anti-union laws remain, as do anti-gay laws such as Section 28 in England and Wales. The government has found the cash at the drop of a hat to follow the US into military adventures in Iraq and the Balkans. It is set to spend more supporting George W Bush’s mad “Son of Star Wars” missile scheme.

“The Labour Party may in rhetoric be committed to providing free care according to need. But by charging for personal care outside NHS settings and by time-limiting free NHS care, it has demonstrated that it believes some aspects of care are the financial responsibility of the individual and not of the state.”

TONY BLAIR has abandoned the pledge made during last year’s flu crisis to increase spending on health to the average across Europe. Countries across Europe spend an average of 9 percent of the total wealth they produce each year on health.

That is set to rise to 11 percent over the next five years. In Britain New Labour is offering to spend only 8 percent of national wealth by 2006. That means cuts across the NHS. Nurses’ pay is so low many are leaving in despair.

The Royal College of Nursing estimates there are 22,000 unfilled nursing vacancies. Many more nurses and doctors are needed to cut the time people have to wait for treatment. France, Germany, Italy and even the US (where there is no NHS) all have more GPs per head of the population than Britain.

Privatisation has also brought cuts. Hospitals built under PFI schemes cost more than those built with public money. The private companies still want to make a profit. So PFI-built hospitals result in 30 percent fewer beds, and one in four staff sacked. The NHS has lost 4,000 beds a year under New Labour.$ “It is clear that the journey from Afghanistan to the United Kingdom is one from desperation to despair. How can we claim to be a tolerant society when we greet those fleeing persecution with such hostility and suspicion?”

HOME SECRETARY Jack Straw is locking up and deporting more people fleeing persecution than the Tories did. The graph shows a 56 percent increase in the number of deportations since 1997. New rules mean that many people fleeing wartorn areas such as northern Iraq are not even let into Britain to claim asylum. New Labour introduced the voucher system, which leaves asylum seekers living on 36.40 a week plus 10 in cash.

1998 March: Brown’s second budget cuts corporation tax on profits to 30 percent. June: New Labour sets meagre rate for minimum wage-3.60 an hour for workers over 21, 3 an hour for 18 to 21 year olds. September: Factory closures and big job losses in Fujitsu, Siemens and other industries as economic crisis sweeps Russia and Asia. Labour refuses to intervene. December: Britain and US launch first in series of air strikes on Iraq, dropping 400 cruise missiles. New Labour also backs sanctions on Iraq that have cost over 5,000 Iraqi lives every month. Mandelson forced to resign from cabinet after revelation that millionaire Treasury minister Robinson lent him 373,000 to buy a house.

2000 April: New Labour’s policy over refugees is “giving life to racists”, says TGWU union leader Bill Morris, as press and politicians whip up hysteria over refugees May: Ken Livingstone is elected as London mayor, wiping out Blair’s favourite, Frank Dobson. June: 58 Chinese refugees found dead in the back of a lorry in Dover. Government presses ahead with attacks on asylum seekers. October: Four die in Hatfield rail crash. Government refuses to renationalise rail. 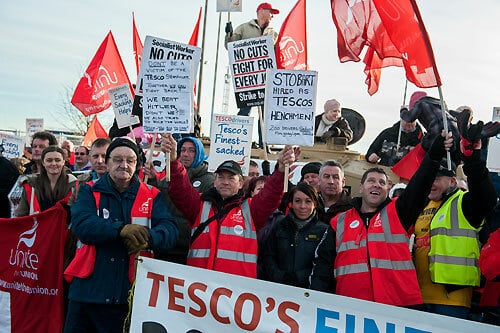