The New Labour government has been mounting a concerted media campaign to soften up the fuel protesters in advance of the expiry of their 60-day deadline. Jack Straw’s apparent gaffe in encouraging motorists to stock up with fuel may have been part of this strategy.

According to the Financial Times, “Panic buying may even be helping the government. Ministers deny triggering it deliberately but it transfers a vast amount of fuel from storage tanks to private vehicles.”

At the same time, the insistent message is getting out that all the resources of the state will be used to break any future fuel protests. The police and the oil companies have been lined up, and soldiers are being trained to drive tankers.

In all this the Blair government seems to have the support of the trade union leaders. They have been wheeled out to criticise the oil companies for collaborating with the protesters last time, and to denounce comparisons between the planned demonstration and the Jarrow hunger march in the 1930s.

It is certainly true that the fuel protesters have little in common with the working class movement. Their hard core consists of small bosses, often with right wing politics, and sometimes, in the case of the hauliers, with a history of strike breaking.

Cutting fuel prices won’t remove the deeper causes of their discontent-for example, the crisis in farming. Moreover, if the result was more traffic on the roads, then the already chronic problems of congestion and pollution would simply get even worse.

This doesn’t mean, however, that trade unionists and socialists have any interest in seeing the government break the fuel protests. History shows that, again and again, Labour governments have presided over measures that have been used against the organised working class.

This was true of the first Labour government in 1924. Ramsay MacDonald allowed civil servants to continue with strike-breaking preparations that were put into action by the Tories against the General Strike in 1926.

This helped to open the door to Margaret Thatcher’s offensive against the trade unions in the 1980s. It is the height of childishness for left wing Labour MPs to complain that the police didn’t arrest fuel protesters the way they did striking miners in 1984-5.

Do they think it will help the left if the police get away with suppressing direct action? One thing is absolutely certain. Any addition to the state’s repressive armoury to deal with fuel protests will be stored for future use against the organised working class.

What we are seeing, in Britain as elsewhere, is growing discontent with the way in which the world is run. This can take the form of action that is self consciously directed against the system itself, as in the case of the anti-capitalist protests in Seattle and Prague, and in Nice next month.

But often it takes a more confused and ambiguous form. The fuel protests are such an example. Observers not connected with the left are able to see this. So the economist Paul Krugmann wrote in the New York Times at the time of the last fuel protests that they were an example of people insisting that there are limits to the market.

The philosopher John Gray placed them alongside Seattle and Prague, arguing, “Globalisation is not compelling a convergence on the political centre ground. In some countries it is producing new, sometimes dangerous varieties of radicalism.”

This is not an argument for just cheering the fuel protesters on. But lining up with the government against them will just drive them into the arms of the far right.

Trade union leaders who were fulfilling their duty to their own members and to the broader labour movement would be taking direct action themselves. They would be doing so to restore the link between pensions and earnings, to renationalise the railways, to stop the Private Finance Initiative, to tax the rich to finance these and other reforms.

Such a decisive lead wouldn’t just give hope to millions of ordinary working class people. It could draw towards the labour movement many of the confused people from a lower middle class background who were drawn into the fuel protests. 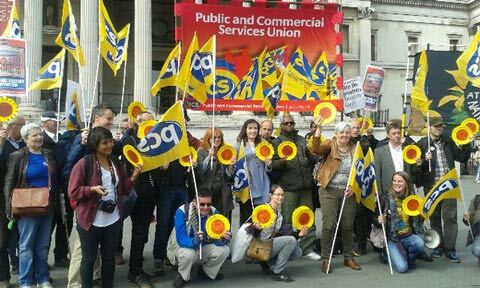 3,000 health workers could strike in Yorkshire