Homes lie empty while thousands are in need

“AS WE enter the 21st century, we are enjoying unprecedented levels of prosperity.” That is the glib opening phrase of deputy prime minister John Prescott’s housing green paper, unveiled last week. The green paper sets out New Labour’s vision for the future of housing. It is a dismal document. It embraces the market madness that lies behind the current housing nightmare. And it will increase that madness by driving through the mass privatisation of council homes.

HOUSING has become a nightmare for many in Britain today. The problem is marked by two extremes. In some areas, especially London and the south east, the vast majority of ordinary workers simply cannot afford the mortgages now needed to buy a home. Yet in other areas, like many northern industrial cities, vast numbers of houses stand empty or cannot be sold.

People have left such areas in search of work only to find, if they do get a job, that they cannot afford anywhere decent to live. Homelessness is at appalling levels. The government’s own figures show that some 2,000 people end up sleeping on the streets every night.

Yet at least 770,000 homes stand empty around Britain. The vast majority of these buildings are perfectly decent. Yet they are kept empty by private owners hoping to cash in on rising prices and rents. There are 114,000 empty homes in London and 40,000 families are officially homeless.

Councils have been stopped from building and properly maintaining estates. The result is a massive repairs backlog and run down estates. Rotten housing is not confined to sprawling council estates. Many private landlords fail to maintain or refurbish the homes they rent out. The government’s own figures report that three million homes in Britain are below the minimum official “housing fitness standard”.

Top up your debt THE government’s only solution to the problems of high house prices is to suggest it may introduce “top-up” mortgages for “key workers such as teachers and nurses” in some areas. The idea is that someone would get a mortgage on a house costing 125,000, for example. They would get an ordinary mortgage for 65,000, itself attracting monthly payments well over 500. They would then be given an “interest free top-up” mortgage of 50,000. And that huge sum of money would still have to be paid back too. The scheme is aimed at nurses and teachers, yet how many of those can possibly afford this kind of money?

“Many young teachers are coming into the job with the burden of debt from student loans round their necks already,” says a London teacher. “The real answer would be building affordable social housing, not this debt scheme.” And what about other “key workers” in the NHS like porters and domestics or transport workers on the buses or the Underground? The government refuses to do the one thing that could make a difference-challenge the market madness in housing.

COUNCIL HOMES have long been the key to getting decent, affordable housing for millions of working class people. Yet New Labour wants virtually all the remaining 3.2 million council homes to be handed to privateers in the coming decade. The result will be higher rents, less secure tenancies and whole communities being bulldozed.

Already over 200,000 council homes have been privatised in the three years of New Labour government. This figure is more than the Tories managed in all their years in office. Now New Labour wants “the transfer of up to 200,000 homes a year from local authorities” to private businesses. Already plans are under way in cities like Birmingham, Glasgow and Sheffield for mass privatisation of council homes.

The new owners are called Registered Social Landlords. Some are existing housing associations. Others are newly established companies. They may claim to be “not for profit” but they are all private businesses which raise their money from the City. That money has to be paid back with interest-profit which will come from tenants’ rents.

Housing association rents are already 16 percent above council rents, and evictions are 70 percent higher. Some of the housing company executives are grabbing fat cat salaries. John Belcher, head of Anchor Trust, got 149,000 last year. Barry Natton, boss of Riverside Housing, got 120,000. Under the privatisations council tenants lose their existing “secure” tenancies and instead become “assured” tenants. This change gives tenants far less rights. It makes it easier for landlords to evict them for minimal rent arrears.

Battle to pay the mortgage

“OUR POLICIES support sustainable home ownership,” boasts New Labour. Some 69 percent of all households in Britain now “own” their home. In reality banks and building societies own these homes, with people struggling to keep up their mortgage payments. Repossessions may have fallen from the peaks of the early 1990s, but last year 30,000 families still had their homes seized by banks and building societies. Soaring house prices in London have put owning a home way beyond most people’s reach.

A common example is a one bedroom flat in a tower block in one of the poorest parts of east London advertised for sale last week at 99,000. That could translate into monthly mortgage payments of over 900. Three bedroom houses even in poor boroughs like Hackney or Tower Hamlets are routinely advertised at prices over 300,000, attracting monthly mortgage payments of 2,500. Private rents often attract even higher monthly payments than mortgages, and there is little chance of workers getting council housing. “Most of the people I work with were born and bred in the area around this workplace,” says a postal worker at the giant NDO sorting office in Islington, north London. Many were living with their partners and young children in one bedroom council places, or with their parents. But nearly all have been forced to move further out of London to get somewhere decent to live.” An ambulance driver says, “Most people I know have to do overtime, 40 hours a month, just to keep up mortgage payments, just to keep their heads above water.”

New Labour claims the 10 billion needed for the repair and refurbishment of council homes does not exist. Yet the government does have this money. It says it will write off councils’ housing debts in a “one-off special payment”, but only if they privatise. That “special payment” amounts to 12 billion. Public housing could also be funded through taxing the rich and big business, and ending the money wasted on nuclear weapons.

War is part of the global system

'Now that's what I call a handover' 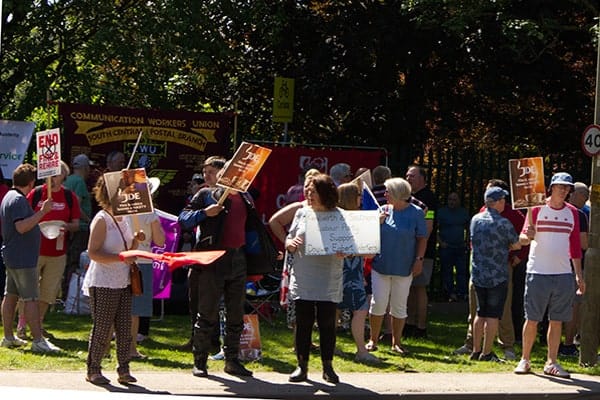