After the successful strikes against the government attacks on legal aid earlier this month, a new petition has been launched to save legal aid and access to justice.

Barristers in England and Wales struck on Monday 6 January against Tory justice secretary Chris Grayling’s plans to slash £220 million from the legal aid budget. If the cuts go through, two thirds of law firms would disappear and only people rich enough to hire their own lawyers would get to choose representation.

The petition has been launched by Justice Alliance, a coalition of 120 groups and organisations demanding an end to legal aid cuts.

Matt Foot, a solicitor and a founder of Justice Alliance said, “The action taken on the 6 January across the country was the first of its kind in history. There were arguments a few months ago that we couldn’t take action but the support was very impressive.

“The Justice Alliance protest at Westminster Magistrates Court was inspiring in the breadth of support within the speakers from users of legal aid. I didn’t see a single person walk into court.

“In order to keep the pressure on the government we are launching a fresh petition to save legal aid and keep access to justice. We need to get as many signatures as quickly as possible to confirm there is strong public support for legal aid and no support for Grayling’s proposals.” 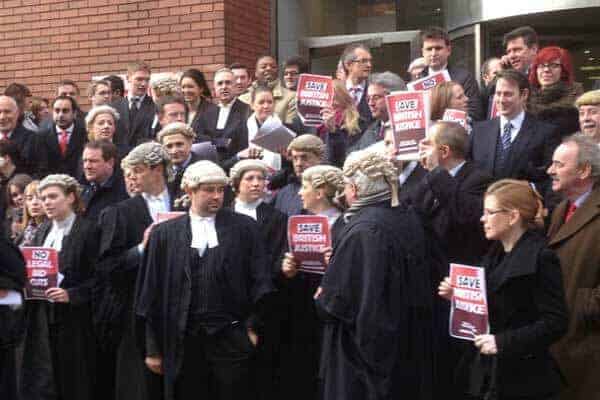 Lawyers to walk out in defence of legal aid