New revelations from the occupation of Iraq 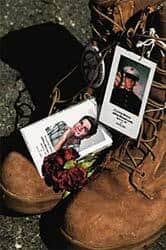 The boots of Jeffrey Michael Lucey, who committed suicide six months after returning to the US from Iraq, at a vigil outside last year’s Republican convention (Pic: Jess Hurd/reportdigital.co.uk)

New evidence of how mercenaries working with US forces in Iraq have killed and brutalised unarmed civilians was revealed by whistleblowers this week.

Four men who worked for private mercenary firm Custer Battles spoke out, revealing how innocent Iraqis, including children, have been fired upon and one crushed by a truck.

Bill Craun, Jim Errante, Ernest Colling and Will Hough are all former soldiers who worked for Custer in Iraq guarding supply convoys. They told the US television programme NBC News of brutal incidents that took place in November of last year—at the same time as the US assault on Fallujah.

Craun said, “What we saw, I know the American people wouldn’t stand for.” The men claimed that on one mission to escort ammunition and equipment on 8 November, the day the attack on Fallujah was launched, a mercenary shot his AK-47 assault rifle into a car to clear a traffic jam.

The mercenary “sighted down his AK-47and started firing. It went through the window,” Colling said. “As far as I could see it hit a passenger. And they didn’t even know we were there.”

Colling described how the convoy passed two Iraqi teenagers by the roadside and shot one. He said, “The rear gunner in my vehicle shot him. Unarmed, walking kids.”

Craun told how a small car with kids in the back seat was crushed by mercenaries in a pick-up truck. Craun said, “The front of the truck came down. I could see two children sitting in the back seat of the car with their eyes looking up at the axle as it came down and pulverised the back.”

Asked if anyone could have survived inside the car, Hough said, “Probably not. Not from what I saw.” Craun was adamant that the victims were ordinary Iraqi civilians. “These aren’t insurgents that we’re brutalising. It was local civilians on their way to work. It’s wrong.”

He added, “If we continue to let this happen, those people will hate us even more.”

Craun e-mailed a friend at the Pentagon two days after the events, saying, “I didn’t want any part of an organisation that deliberately murders children and innocent civilians.”

He and Colling said they had quit their jobs with Custer straight away. Errante also left after witnessing indiscriminate shootings of Iraqis saying, “I didn’t want to be a witness to any of these, which could be described as a war crime.”

END THE OCCUPATION OF IRAQ Protest Saturday 19 March, 1pm, Called by the Stop the War Coalition www.stopwar.org.uk and backed by CND, MAB and Military Families Against the War
Topics Iraq, Iraq war

Military families back US protest against Iraq war