Unions have put back a planned strike at London Metropolitan University.

The action, which was set for Thursday of last week, was to be the first joint strike by the UCU and Unison unions.

But Unison’s London officials suspended the strike at the last minute after management claimed it had not received notification of the action. The UCU then followed suit.

The unions have now called a new strike date for Tuesday of next week.

Max Watson, the assistant branch secretary of the Unison branch at London Met, told Socialist Worker, “The suspension of the strike is a setback and a disappointment.

“But it shows that management is scared of our action and how far it is prepared to go to stop us taking it.

“There is a clear strength of feeling among our members – nearly 72 percent voted for action in our ballot.

“They weren’t happy that the strike was suspended but management’s actions have made people even more determined to fight.

“More people are joining the union.”

Mark Campbell is a UCU rep at the university and is on the UCU’s national executive. He said, “Unison’s leadership should have called management’s bluff.

“However, UCU made the tactical decision to suspend action to allow Unison to get a (recorded) seven-day notice in place and to have our joint strike rescheduled as soon as possible.

“In retrospect, a number of UCU members felt it would have been better to stick with the original strike date and then attempt to come out with Unison again once they had re-called their strike.”

Bosses must not be allowed to get away with using the threat of the law to prevent unions from taking action.

From Visteon to Lindsey oil refinery, workers have defied the anti-union laws in recent months and won.

Unofficial action at Tower Hamlets College has put the bosses on the defensive – and it is this kind of action that can win. 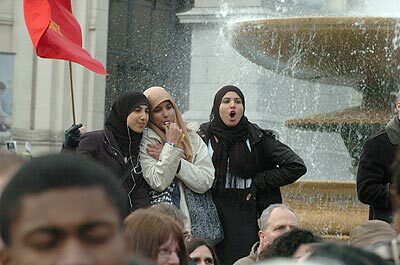 Pictures of 24 February Troops Out demo in London (2)