More people struck this time than during the last strike in October. The official strikers are in Unison, but Unite (T&G section) members also joined the action at some workplaces.

At the dust depot some non-union members backed the strike after joining the union on the picket line. Numbers of agency workers also took part.

Some schools which last time had not taken action were part of it this time.

There is deep anger across the workforce that Michael has been sacked. He is rightly celebrated a someone who has worked tirelessly to improve the working lives of people in Newham,

Michael was sacked for organising an “unauthorised mass meeting” of refuse and cleansing workers and on a second charge of representing the members and not the council.

His real offence is to be an effective trade unionist and a thorn in the side of the right-wing Labour council that runs the borough.

The real reason for the dismissal is to attack Unison because of its campaign against Newham’s proposals to privatise hundreds of jobs in street cleansing, refuse, school meals and school cleaning.

In addition the union has challenged the council’s controversial plans to move over 2,500 employees to a building fraught with problems in the middle of the hard to reach Royal Docks area of the borough.

At a strikers’ rally there were several testimonies form workers who said they would have been sacked without Michael’s assistance.

There was applause for Unison regional official Vicky Easton when she pledged the union’s full backing for the campaign to win Michael’s reinstatement.

But some of the loudest applause was for speakers who demanded that the union should cease payments to the Labour party while it was sacking trade unionists. 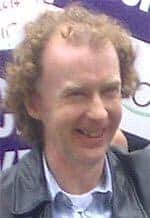