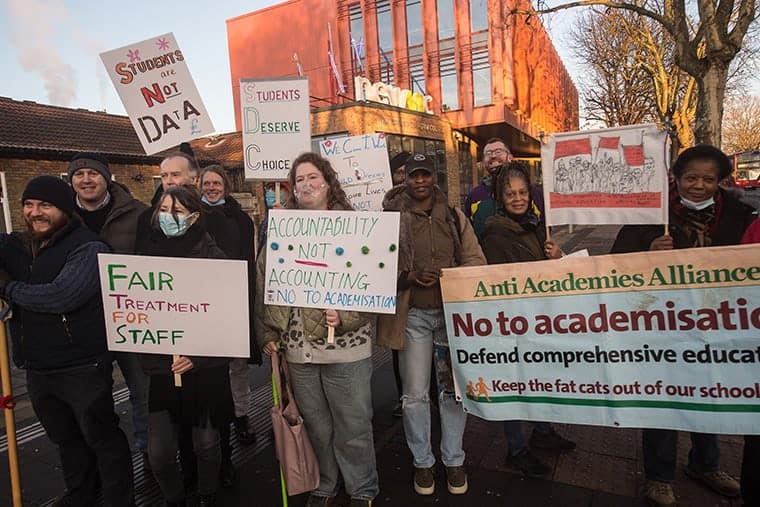 Workers at Newham Sixth Form College in east London have beaten back the threat of academisation, thanks to a fantastic fightback.

After 12 days of strikes by NEU union members, NewVic bosses agreed they have “not made any decision to academise”.

They said their “preference” is to stay “an independent, stand-alone, sixth form.”

NewVic is a good example of how to fight back. Throughout the strike, NEU union members held big pickets that gained a lot of attention.

The workers were determined to strike long and hard while not giving in for less than what they demanded.

Bosses last week tried to end the dispute with a promise not to academise until 2025.

But as two workers told Socialist Worker during the last week of strikes, “If management doesn’t want any more strikes, they must stop academising”.

When strikers’ morale could have faded they decided to continue pushing back, looking for new ways to grow their fight.

They held rallies and campaign sessions at the local market, getting good responses. Some students also joined picket lines with many taking leaflets and discussing the situation with their teachers.

After working throughout the Covid-19 pandemic workers shouldn’t settle for a profit driven education system.

One NEU member told Socialist Worker, “Privatisation affects those at the bottom of society much more than those at the top.”

Bosses at St Matthew’s primary school in Preston pushed ahead with academisation plans on Tuesday of this week, despite resistance by teachers.

Members of the NEU union struck for 12 days against the plans, but the school’s governors didn’t back down.

The school will join the Cidari Multi Academy Trust run by the Diocese of Blackburn.

NEU rep Julie Copeland told the NEU Left blog, “We will all be wearing black this Tuesday, the school as we know it will have gone.

“The governors are hoping the school will convert this week and then everything will be forgotten—but I don’t know how they expect us to do that because they still haven’t sat down with us.”

Thousands of teachers at 23 private schools belonging to the Girls’ Day School Trust (GDST) have voted 95 percent for strikes to defend their pensions.

Bosses want to use fire and rehire tactics to force through changes that would cut an average of 20 percent from workers’ pensions.

Many workers would lose tens of thousands of pounds in contributions throughout their careers. Meanwhile, the Trust’s finances are healthy, according to the NEU union, and it plans major spending on new buildings.

NEU members now say they will hit hard with strikes unless the proposals are scrapped—the first in the Trust’s 194 year history.

Six days out in Somerset

Teachers at Gordano school in North Somerset were set to strike for six days from Thursday of this week against unacceptable workloads.

NEU Senior Regional Officer Ian McCann said workload “has now come to such a level that it is having a detrimental effect on our members’ welfare”.

Big no vote to pay cut

Teachers in Scotland have overwhelmingly rejected a huge pay cut—with 98 percent voting against the pay offer in a ballot by the EIS union.

The deal involves a 1 rise from April 2021, 1 percent from January 2022, and a £100 one-off, unconsolidated payment for all. This means a big pay cut. It’s important to move quickly to a formal ballot and strikes.