News of the world retreat

After near-riot in Portsmouth

News of the world retreat

THE NEWS of the World has been forced, for now, to back down from its disastrous “naming and shaming” of paedophiles. The newspaper’s campaign has managed to do everything children’s charities, the police and probation service warned it would. It has driven child sex offenders underground, putting children at potentially greater risk.

It has also led to a series of murderous vigilante attacks, the worst of which was a near-riot in Portsmouth last Thursday. The man targeted, Victor Burnett, fled town. A Portsmouth police officer told newspapers, “It is what we always feared about the ‘naming and shaming’ campaign. We knew exactly what he was up to. Now [Burnett] has gone underground.”

Rebekah Wade, editor of the News of the World and close to New Labour, has gone to disgusting lengths to get names and pictures of child sex offenders. The Daily Express reported last weekend claims that News of the World reporters had approached the Nazi National Democrat group-a split-off from the National Front.

The News of the World asked veteran Nazi Ian Anderson whether they could use his “files” on paedophiles. Anderson says he turned down the paper’s request on two occasions. Rebekah Wade filled seven pages of her paper last Sunday trying to justify her campaign. Nowhere did it mention the brutal attacks carried out against individuals wrongly identified as paedophiles either by the News of the World or by others the paper has encouraged.

A group called Antimatter has been sending “paedophile in your area” letters to addresses in London and the Home Counties. Victor Terry, a 78 year old retired ambulance driver living in Croydon, was one victim of this campaign. A letter informed local residents that Terry had been found guilty of molesting two boys.

The letter gave Terry’s full address and phone number. It explicitly praised the News of the World’s campaign. Terry was completely innocent of any crime, as were Michael Horgan, a 55 year old RAC worker from Lewisham, south London, and Gerald Baker from Guildford, who were also targeted by Antimatter.

All three men have now been given police protection. LAST WEEKEND’S disturbance in Portsmouth was a result of the News of the World’s campaign

THE NEWS of the World says most paedophiles reoffend. In fact:

No lessons from Megan’s Law

THE NEWS of the World has shamelessly exploited the tragic murder of Sarah Payne in order to increase its circulation figures. It has used the young girl’s parents to call for “Sarah’s Law”. This is a copy of Megan’s Law in the US, under which the authorities allow parents access to an official list of child sex offenders.

So far New Labour has resisted going down this road, although Home Office minister Paul Boateng went out of his way on TV at the weekend not to attack the News of the World. Instead he said, “The Sarah’s Law campaign proposals make an important contribution.”

Boateng also raised the possibility of “indefinite sentences” for some offenders. This is a massive attack on civil liberties. It would turn Britain’s sentencing upside down. Instead of people serving a sentence handed down by a court, they could be theoretically locked up forever.

Experience from the US shows that Megan’s Law does not work. One effect of Megan’s Law has been to drive offenders underground. In Britain 97 percent of child sex offenders comply with the Sex Offenders Register. This means the police know where they are.

Only 80 percent of offenders register in the US. A sweep by authorities in San Fernando county last month found that only 80 of 300 sex offenders were at the addresses at which they had registered. In Washington state alone there have been 30 serious assaults on named child sex offenders so far this year.

In some states offenders have to wear sandwich boards declaring their guilt or have signs put up in their windows. In others offenders are “chemically castrated” or even have their testicles removed before they can get parole. In Montana a judge can order castration after a single offence.

Building the Right to Work Conference

Firefighters, bus and post workers - Sheffield is a city of strikes 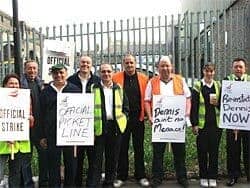