Students and lecturers will unite for education and march through London on Saturday 19 November. They will be saying no to cuts, no to fees and no to debt.

The National Union of Students said, “The government is waging war on students and our education.

“Further Education colleges have been cut to the core, with huge job losses and course closures.

“Tuition fees are rising and the government is forcing universities to run like businesses.

“Students are facing higher debt than ever before with maintenance grants and NHS bursaries scrapped, student loan terms changed and tuition fees set to reach £12,000 by 2026.

“The government has ignored students and staff for too long—this has to stop.”

The march will have an international dimension.

November will see protests to defend free education in 12 other countries—and the ongoing battle against fees in South Africa.

Legal aid reforms have put poorer women and children at greater risk of violence, according to a new report.

Other vulnerable groups include migrants and people with debt and housing problems.

The Justice Denied report looked at the impact of the Legal Aid, Sentencing and Offenders Act (Laso), which came into effect in 2013.

It interviewed workers and representatives of various organisations in the justice sector.

One family court adviser said, “Children are being put at risk of suffering significant emotional abuse to fit a government agenda.”

Sian Hawkins from Women’s Aid told the report, “We are seeing women and children having unsafe contact with perpetrators of domestic violence.”

The report showed that the number of domestic violence applications for legal aid fell by 16 percent between 2011-12 and 2015-16.

Matt Foot from the Justice Alliance told the report, “A free reign has been handed to the worst bullies in society like the bullying employer, the bullying landlord, the bullying partner.”

Immigration was not the key factor behind the vote to leave the European Union (EU), a new study suggests.

Researchers at the University of Warwick looked at the vote across 380 local authority areas in the report, Who voted for Brexit? It found, “Fiscal cuts are strongly associated with a higher Vote Leave share”.

It said, “Migration from predominantly eastern European countries had a distinct effect on voters”, but immigration in general did not.

The report argues that even “drastic changes” in immigration patterns would have been unlikely to affect the referendum result.

But it claims, “The analysis suggests that just a slightly less harsh regime of austerity could have overturned the result of the EU referendum.”

But the study doesn’t show that cuts caused the vote.

Its correlations could be explained by the fact that cuts have hit poorer areas harder, and poorer people were more likely to vote Leave.

Worryingly, the report seems to bemoan the “chasm” between support for Ukip and its representation in parliament.

Financial crises are built into the system

A “sales culture” in retail banks was one of the central causes of the 2008 financial crisis, according to a new report released by bosses’ research firm New City Agenda.

The Culture of British Retail Banking report pointed out that, since 2008, retail banks have been charged £38.5 billion in fines.

And it argued that the problem has not gone away. “It is not unlikely that more bad news will come to light,” it said.

The report concludes that regulators need to be strengthened. But it said this would take “a generation” to have any effect.

One of the authors, Andre Spicer, accidentally pointed out that the problem is cyclical and part of capitalism.

He explained how banks have reacted to financial crises over the last 300 years.

“What we found is that there would be a crisis, a public outcry, new laws would be put in place and then slowly over time these would be watered down,” he said. 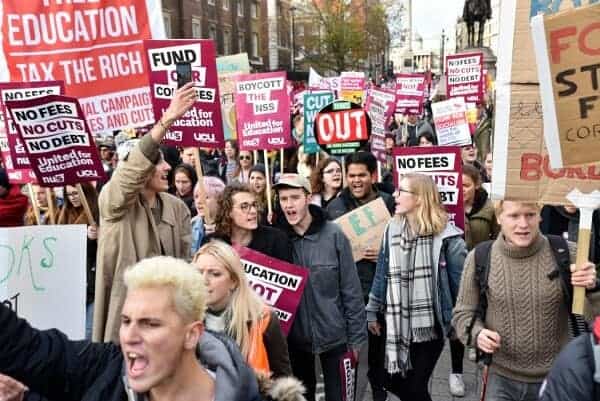