The first national strike in the health service for 18 years began on Thursday evening. The 24-hour strike by 1,000 members of the Unison union at NHS Logistics saw low paid workers in direct confrontation with New Labour’s privatisation policies.

The government plans to hand the not for profit agency that supplies hospitals across England over to DHL, a German corporation best known as a parcel courier.

Striking workers formed picket lines at the five depots. The strike was almost completely solid at Runcorn in Cheshire, where up to 100 workers gathered outside the depot, and at Normanton in West Yorkshire.

At the Maidstone depot in Kent, 30 workers attended the picket line. Tony Owens, a union rep on the night shift, spoke to Socialist Worker as the strike got under way. “I’m gutted that it’s come to this,” he said. “This is back door privatisation of the NHS.

“We’re a not for profit agency, but now they want someone to profit from us. I blame the upper echelons of the Labour Party for this. I’ve voted Labour since I could first vote, but now they seem to be forgetting the grassroots.”

Dozens of workers at the depot had joined the union in the run-up to the strike. “They’re joining because they see that the union is strong,” said Paul Harper, the Unison branch secretary for the Maidstone depot.

The action at Maidstone remained solid on Friday morning. “We’ve had a good turnout,” said Richard McPherson, a Unison steward. “It’s the first time people have been on strike, but at the end of the day it’s about solidarity.”

The strikers were buoyed up by messages of support, donations and visits from other trade unionists. Post delivery workers respected the picket line on Friday morning, and a small number of NHS Logistics workers who were not in the union also refused to go into work.

This is a crucial battle – coming just days after health secretary Patricia Hewitt announced that there was no limit to the extent of private sector involvement in the NHS.

A second 24-hour strike is due to start on Tuesday evening, and will be taking place as Labour debates health at its annual conference in Manchester. 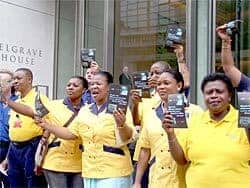