This article is over 19 years, 2 months old
PRIVATE FIRM ISS Mediclean has once again been forced to make an improved offer for low paid health workers because of threatened strike action. The firm has offered all ancillary workers at Hairmyres Hospital in East Kilbride a minimum wage of £5 per hour - the rate the workers were demanding. ISS Mediclean has also offered workers improved weekend, night shift and sick pay entitlements - something it had previously refused to negotiate on.
Downloading PDF. Please wait...
Saturday 09 November 2002

PRIVATE FIRM ISS Mediclean has once again been forced to make an improved offer for low paid health workers because of threatened strike action. The firm has offered all ancillary workers at Hairmyres Hospital in East Kilbride a minimum wage of £5 per hour – the rate the workers were demanding. ISS Mediclean has also offered workers improved weekend, night shift and sick pay entitlements – something it had previously refused to negotiate on.

Over 200 low paid porters, domestics and other ancillary workers at the PFI hospital had been set to go on a one-day strike last week. This was followed by two days of action. The Hairmyres offer follows hard on the heels of a similar U-turn by ISS Mediclean in Swansea.

Three days of strikes by over 500 health workers in four Swansea hospitals, with the threat of escalating action, forced the firm into making an improved pay offer. They were both inspired by the victory of Glasgow health workers against the giant Sodexho firm.

There is an angry mood bubbling across the health service against appallingly low pay rates. That mood is being fired by the sense of injustice felt by workers who have been transferred to private companies, usually under PFI deals, and get an even worse deal.

In five east London NHS trusts, for example, workers have put in a pay claim for a £5 an hour minimum wage against ISS Mediclean and other private firms. The latest round of disputes shows the privateers can be beaten back. Now trade union leaders need to build on this action as part of a much wider fight to kick the privateers out of the health service altogether.

AROUND 500 porters, telephonists and cleaners in Swansea’s Singleton, Morriston, Hillhouse and Cefn Coed hospitals are balloting on an offer from ISS Mediclean. Workers in Swansea did win improvements in pay and conditions. But not all the strikers are happy with the result.

Many feel they could have won much more from Mediclean. The fact union leaders called off a planned week-long strike allowed Mediclean vital breathing space, and some conditions were then conceded by the union in the negotiations.

Everyone gained something from the offer, but some, especially the porters who used to work for the NHS, are angry because they could have won more. Some wanted to kick Mediclean out of the NHS entirely. But as one striker put it, ‘We have taught Mediclean a lesson that we will not be ignored, and we will be back.’
Matthew Shepherd

AMBULANCE workers in Scotland have voted overwhelmingly for industrial action to improve their pay and conditions.

Paramedics and control staff are demanding a modest 5 percent pay rise. So far Scottish ambulance chiefs have offered just 3.6 percent and a reduced working week. But this has been overwhelmingly rejected by workers.

AMBULANCE workers in Lincolnshire have voted to take action over pay. The workers have voted nine to one for industrial action, which will include working to rule and an overtime ban. Workers are demanding a 6 percent pay increase or £1,000 – ‘a grand in the hand’. 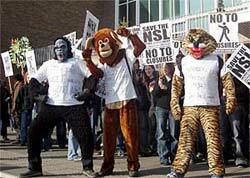