Nightmare of a Tory revival

Nightmare of a Tory revival

ANN WIDDECOMBE as home secretary. Michael Portillo in charge of public spending. William Hague as prime minister. This is the nightmarish spectre raised by last weekend’s opinion poll putting the Tories just 3 percent behind New Labour. The Tory Party’s climb in the polls will have sent a shiver through working class communities.

Blair has now achieved the seemingly impossible task of raising the Tory living dead. People voted with such great hopes for change three years ago, but Blair has brought Tory policies.

The same opinion poll which showed the Tories narrowing the gap also found that six in ten voters believe New Labour has broken its promises, has failed to reduce inequality and has not improved the NHS. This all comes after Blair bombed so badly at the Women’s Institute rally last week.

Millions of Labour voters are angry at Blair’s betrayals. Many have stayed at home in recent elections, feeling there is no point getting involved in politics since each of the main parties lies and cheats. Hague’s scapegoating feeds off such feelings of despair. His rise in the polls can lead some Labour supporters to rally round the government out of fear.

But New Labour and its big business policies are the only thing the Tories have going for them. Hague can be crushed. But that requires building on people’s hopes for justice and equality. Most people want higher taxes on the rich, and a massive boost to health and education spending. Labour is losing out because it is failing to deliver these.

Stop the rot-tax the rich 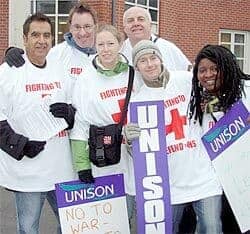 Health workers: ‘They want to sell us crap healthcare’