A worker on the Nissan production line in Sunderland (Pic: PA)

Hundreds of workers at the Nissan car plant in Sunderland protested on Saturday against attacks on their pension scheme.

Bosses at Nissan want to axe the pension scheme of some 1,800 workers at the plant as part of a plan to make “efficiency savings”.

The plan to close the defined benefit pension scheme—which guarantees a fixed minimum wage in retirement—could cost the ­longest-serving workers thousands of pounds.

Some 80 percent of the scheme’s members have worked at the plant for more than 20 years.

Kevin Raine, who has worked at Nissan for 32 years, was due to retire next year.

But he said he now faces working an additional three years.

“I think it is disgraceful what they are doing,” he told the Sunderland Echo newspaper. “A pension is not a benefit. To me it’s people’s livelihoods, that’s what you sign up to.”

And Mark Adams, another marcher, said, “I have been a long term employee of 33 years.

“You have got your goals and aspirations and things you want to do and things you expect, so to find out in the final furlong that things have changed is very disappointing.”

Chris Irwin, who has worked at the plant for almost 24 years, said Nissan bosses had hidden “behind the current pandemic”.

“I’ve never ever seen anything like it in all the years I’ve been there,” he said.

The workers’ Unite union warned that plans to close the scheme have the “potential” to lead to industrial action.

Not only would that be the first strike at the plant since it opened in 1984, but Saturday’s protest was the first demonstration.

Most of the 7,000 workers at the Sunderland plant are already on a worse pension scheme.

And Nissan bosses decided not to renew the contracts of around 248 temporary workers there last month.

Unite leaders in the car, steel and manufacturing industries hope that cooperating with bosses is the best way to protect jobs and conditions.

A crisis in the car industry—caused by the fact that manufacturers are producing more cars than they can sell—means workers at all firms in all countries face attacks.

Workers at a Nissan plant in Barcelona began an indefinite strike in May against plans to close their factory.

A Unite press release said the union sends its “solidarity” to ­workers. The best solidarity would be to take the same kind of action and call a strike immediately. 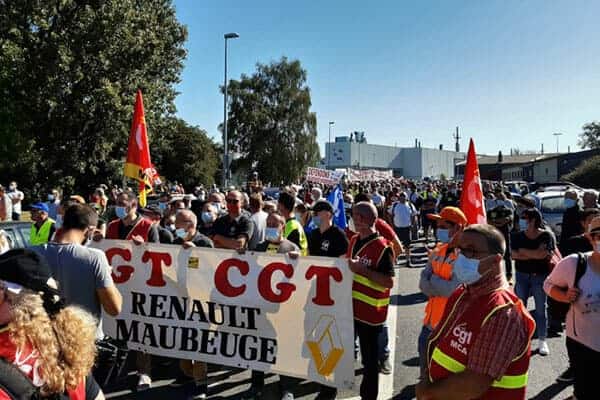