No fun for the fat cats

No fun for the fat cats

LIFE IS very lonely at the top. So much so that the bosses’ Financial Times ran an advice column last week for friendless fat cats. A professor from the London Business School wrote the column in response to a letter from a chairman. The chairman wrote, “I begin to wonder if the job is worth it. I feel very isolated and often lonely. Do other corporate presidents report such feelings?”

The learned professor replies that this is indeed a very common thing. He urges the chairman to “cast his mind back” to his “earliest feelings of managerial loneliness”.

“They probably occurred in your 20s or early 30s…moving up meant leaving close friends behind…from collaborating with your colleagues to assessing them, disciplining them, rewarding them. You probably received very little help during this difficult transition period. evertheless you were excited. You responded inwardly to the thrill of power, to the recognition your new status ensured. You were on your way. But your preparation for the role of chairman or president required you to develop an air of mystery… People like you are driven by a desire for power, autonomy and recognition.”

As a result, “like it or not, as chairman of a global corporation, you are truly on your own, you have no patrons, no mentors, no real corporate friends.” The conclusion for the poor boss is a bit disappointing, however. Our professor just relies on the tried and trusted advice of agony aunts and overpaid analysts all over the world-get some friends.

GERMANY HAS got its own version of the Dome-and it is not doing any better than the one here. The 1 billion World Expo Fair, the country’s biggest jamboree for more than 20 years, flopped in its first week. Management has laid off more than 500 staff on the souvenir stands because there are so few visitors.

The prices are too high and crashed computers bodged up the bookings. Anti-capitalists are in on the act as well. Members of the socialist group Linksruck dressed up in posh clothes, got to the front of the audience at the grand opening and then whipped out posters denouncing the whole event.

THE Scottish secretary John Reid launched a safety at work campaign last week. Reid spoke of the need to cut deaths and accidents at work at the new Glasgow

Science Centre, which is being built in Govan. However, Reid’s speech was cut short when one of the site’s construction workers plummeted from a 30 foot scaffold. Steel erector Donnie Munro was taken to hospital with broken ribs.

HOW BAD can it get for the Dome? On Monday even Scotland Yard lost interest in New Labour’s white elephant. The Yard announced that it was to disband its 35 member special squad originally assembled to police the masses of people New Labour said were going to flock to the Greenwich tent.

NEW LABOUR can’t even get its stupid gimmicks right at the moment. Sane people will probably have long forgotten that chancellor Gordon Brown promised a war on the “black economy” in his last budget.

He promised fraudsters, benefit “cheats” and tax dodgers the chance to come clean by establishing a “no questions asked” telephone helpline. One problem for all those who were persuaded by Brown that they wanted to make a clean breast of it-the government hasn’t set the line up.

PERTHSHIRE IS the place to be if you are rich and idle, if the Tatler is to be believed. “Perthshire socialites party incredibly hard all weekend,” it reports. “The scene is small and select and almost everyone on any guest list will live in a castle or have a title. There are a lot of weddings, balls and polo parties. Perthshire is also close to places like Edinburgh. It is very important to know people up there.”

LONDON Transport is advertising a brilliant special offer at the moment. Anyone with a one-day travelcard can get a special two for the price of one entry ticket for various museums and art galleries. Included in the deal are the new Tate Modern, Tate Britain and the National Portrait Gallery -all of which are free.

MANAGEMENT Today magazine is advertising a convention on “People and Profits in the New Economy”. One of its “keynote” speakers is Anthony Coleman of the internet firm boo.com. Yes, the boo.com that just went bust.

“THIS IS not part of our agenda. I want to make that clear.”

“IT IS not possible for us to create an environment in which the state has some overarching responsibility for paying people who are not at work.”

“FFION HAGUE on the Orange committee can kiss my behind… It’s so cheap taking shots at immigrants. This country was built on refugee work.”

“TB promised a new Britain, a transformed NHS and public services, and all we have got is more of the same. Too little change, not too much.”

“TB IS not believed to be real. He lacks conviction, he is all spin and presentation, he says things to please people not because he believes them.”

“TB HAS not delivered. He said he would change Britain, but instead things have got worse.”

“OUT of touch… condescending… rather sad…this is a speech that looks once again like TB pandering.”

“FOR ONCE this newspaper finds itself agreeing with almost every word uttered by Tony Blair.” 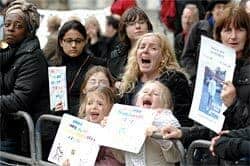