This article is over 17 years, 4 months old
BUSH AND BLAIR’S war has never been less popular in Britain. Just 29 percent said in a recent opinion poll that they supported the war on Iraq. Most wanted the withdrawal of British troops and an end to the occupation. Every day brings more reasons to oppose this ongoing war.
By LINDSEY GERMAN, convenor of the Stop the War Coalition
Downloading PDF. Please wait...
Saturday 05 March 2005

BUSH AND BLAIR’S war has never been less popular in Britain. Just 29 percent said in a recent opinion poll that they supported the war on Iraq. Most wanted the withdrawal of British troops and an end to the occupation. Every day brings more reasons to oppose this ongoing war.

This week Tony Blair’s government rammed through the House of Commons the biggest attack on our freedoms that anyone can remember —all in the name of Bush’s “war on terror”. When people took to the streets in this country against apartheid in South Africa, no one imagined that that regime’s methods would come to Britain.

But they have. Under Labour’s bill people can be placed under house arrest, without trial and on the word of the home secretary or a judge.

While the “war on terror” shreds our liberties at home, it is bringing chaos and destruction to Iraq.

The elections in Iraq did not alter the fact that most Iraqis want the US and British troops out. The conviction of four British soldiers last week highlighted just a part of the torture and abuse Iraqis suffer at the hands of the occupation.

The victims were not called to give evidence. The senior officers implicated during the trial have all been promoted. Even army insiders admit the torture of Iraqi prisoners goes far wider than this one case.

Everything the anti-war movement said about this war has been proved right, and everything Tony Blair said has been shown to be a lie.

Now Bush and the neo-conservatives are making noises about Iran and Syria. Does anyone think Blair will not go along with them?

The Stop the War Coalition was set up to oppose not just the attacks on Afghanistan and then Iraq, but also the further wars Bush has in mind. It also set out to defend civil liberties and resist the racist backlash the war has brought.

Wider layers of people, among them increasing numbers of military families, are now contacting the Stop the War Coalition to take part in the national demonstration in two weeks’ time.

It is set to be the biggest march since 300,000 people took to the streets to protest at George Bush’s visit to Britain in November 2003. Join us in demanding no more Bush wars, bring the troops home and no erosion of civil liberties here. 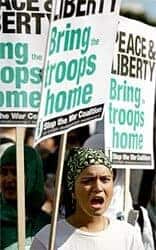 What do we do after councils pass cuts?