‘No one will defend the Labour Party’

This article is over 19 years, 8 months old
A CONFERENCE of the RMT rail workers' union has voted unanimously to stop paying money to New Labour nationally. It was one of a string of resolutions attacking the government passed by delegates at the RMT's train crews section at a conference in Portsmouth last week.
Downloading PDF. Please wait...
Saturday 20 April 2002

A CONFERENCE of the RMT rail workers’ union has voted unanimously to stop paying money to New Labour nationally. It was one of a string of resolutions attacking the government passed by delegates at the RMT’s train crews section at a conference in Portsmouth last week.

‘It was almost impossible to find anyone who would defend the Labour Party,’ Greg Tucker, an RMT member on South West Trains, told Socialist Worker. ‘One of the resolutions called for funding parties that stand up for workers’ interests-that is clearly parties to the left of New Labour.’

The conference is one of a series of ‘grades conferences’ where RMT members in different sections meet, and did not have decision making power over national policy. But the call for funding alternatives to New Labour is an indication of the depth of anger among rail workers, whose unions have been at the core of the Labour Party for a century.

About 20 delegates, a third of the conference, and RMT general secretary Bob Crow, attended a Socialist Alliance fringe meeting at the conference. Bob Crow made a blistering speech in the conference. He got a standing ovation as he ripped apart what the Blair government stands for, and promised to reorganise the union so it will be in a stronger position to mount serious industrial action.

‘I’m not a member of the Labour Party,’ he said. ‘But I was rung up by a senior Labour Party official just after I won the general secretary election and asked to join. I refused. Blair is attacking people in Afghanistan and Iraq, and attacking us at home.’

He spelt out why the union had insisted that it would only fund MPs who backed four simple demands, including the abolition of the anti-union laws and the total renationalisation of the rail industry.

The RMT has shifted sponsorship to a new group of mostly left wing Labour MPs. ‘The union’s political fund is not exclusively for the Labour Party,’ he said. ‘The money is there for campaigning. And unless Labour changes its policies it cannot expect any political or financial support from us.’

The conference heard calls not just for socialist alternatives to New Labour, but also for national industrial action. There are several ongoing disputes. RMT members on Arriva are continuing their long running campaign of strikes over pay.

Drivers in the RMT and Aslef unions on First North Western have announced three more strike days over the next three weeks against unfair disciplinary measures. Drivers for the EWS freight company have voted overwhelmingly to strike over pay and hours. The first 48-hour strike is planned for 29 and 30 April, and a second on 8 and 9 May.

The 67 delegates at the RMT conference donated £500 to the Arriva strike fund. They also passed a resolution which calls for strike ballots on all 26 train operating companies if Railtrack’s safety arm refuses to improve the safety role of train crews.

The conference also voted for a return to national pay bargaining, which would be a powerful blow to privatisation. Rail union leaders and activists still face the task of building on recent victories, and winning disputes such as Arriva, First North Western and EWS.

But after last week’s conference, they can do so certain in the knowledge that they are part of a wider mood of resistance to New Labour which is spreading across the whole industry. 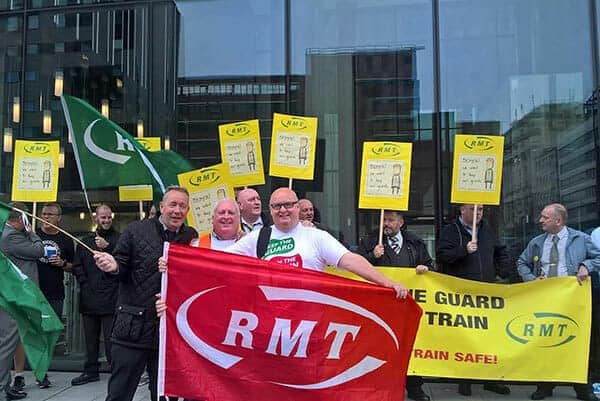