No option for housing truth from New Labour

Labour Party members have got used to passing policy at conferences that is then ignored by the government. But for the government to turn around and tell them the vote never happened is a novel departure even by New Labour’s standards.

As 1,300 delegates from around Britain gathered for the Defend Council Housing (DCH) lobby of parliament on Wednesday of last week, the Office of the Deputy Prime Minister (ODPM) released a briefing paper to Labour MPs that did just that.

The briefing informed Labour MPs to tell lobbyists that conference did not pass a motion in support of the fourth option over housing. The paper also falsely claimed that DCH activists were spreading untruths.

Labour MP and DCH supporter Kate Hoey brought the briefing to the attention of the rally. “It is both disgraceful and disgusting that a minister could send round a briefing like this,” she told Socialist Worker. “Its contents are untrue.”

This view was echoed by Austin Mitchell, another Labour MP who opposes government attempts to privatise council housing. “You rarely see a briefing as daft as this one,” he said. “It says that the resolution passed at conference wasn’t asking for the fourth option – that’s completely untrue.”

The motion, which was passed overwhelmingly, said, “Conference reaffirms its commitment to a ‘level playing field’ ensuring that funds available for stock transfer will be equally available to councils to give tenants real choice and provide a long term future for council housing and calls on government to provide the ‘fourth option’ of direct investment to council housing as a matter of urgency.”

He added, “This briefing is so badly done that you have to assume it was written hastily while drunk, or that the ODPM is in a real panic.”

One Labour Party member at the DCH rally summed up the anger felt by delegates at this slap in the face: “For them to attempt to rewrite history in this way is absolutely disgusting.”

Delegates – including tenants, councillors, trade unionists and MPs – came from all over Britain to demand a level playing field over housing and direct investment. The mood was very angry – and there was a focus on the need to build public rental housing.

Kate Hoey told the rally, “This briefing paper is really a reflection of what tenants in housing campaigns around the country have had to put up with – lies and untruth. And it is very sad that all of this is taking place under a Labour government.”

The rally saw speaker after speaker talk about their anger at the government’s current policy.

Michael Tansey, a Labour councillor from Sunderland, spoke about how he has been treated by the Labour Party for his opposition to the sell-off of council housing.

“Sunderland council sold off its 36,000 homes in 2002,” he said. “I’ve been disciplined by the Labour Party four times for my involvement in DCH, and informed that I won’t be reselected for the next council elections.

“I’m being driven out of the Labour Party by this policy. Since the homes were handed over there are no waiting lists in Sunderland.

Respect MP George Galloway spoke at the rally. “In Tower Hamlets in east London, we have an example of how tenants can reject these plans – and in May we will elect a council that will stop the transfer of council homes,” he said.

Labour MP Michael Meacher called the lack of a fourth option for housing “one of the great scandals of our time”.

“The government talks about transparency and democracy – so why do councils only give one side of the story? Why is there only money for the pro-transfer campaign? Why are ballots so often held before the published ballot day?

“This is the opposite of democracy. It is not choice, but blackmail. Tenants are told to transfer their homes or rot in hell.”

The pressure on the government is growing. At the Labour Party’s spring conference last weekend, a policy forum over the issue was announced.

This is a dramatic about-turn. The ODPM has gone from saying there will be no fourth option to looking at the possibilities. The mood of housing campaigners at the conference was incredibly positive that they can win the fourth option.

Jack Dromey, one of the working group’s members and deputy general secretary of the T&G union, told a DCH fringe meeting at the conference that the working party had been set up on a time scale of 18 months.

We must now demand that councils currently pushing through stock transfer and Almos stop, and that all ballots are stayed until the working group reports.

DCH chair Alan Walter said he welcomed the signals that the government is considering changing policy. “It is the efforts of tenants and trade unionists, the recent no votes and the united campaign we have constructed that have forced this shift,” he said.

“We’re not going to accept a shoddy compromise and we won’t wait until 2007. Now we have to step up this pressure on MPs and ministers and demand that all councils planning stock transfers, Almos and PFI stop immediately. They can’t continue to tell tenants government policy is set in stone – it clearly isn’t.”

To order advance copies of the next issue of Defend Council Housing’s newsletter, out on 27 February, go to www.defendcouncilhousing.org.uk

Belfast rally: 'We are sick of sectarianism' 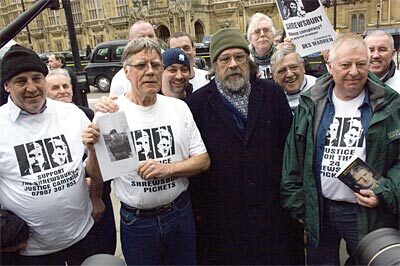 Lobby of parliament for Shrewsbury pickets