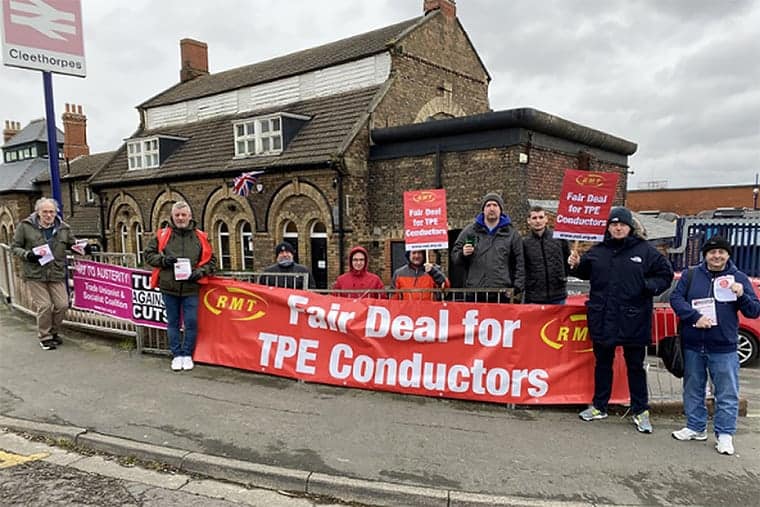 On strike in Cleethorpe (Picture: RMT)

Conductors employed by TransPennine Express walked out on Sunday in the first of four weekly strike days over pay discrimination.

The workers have had a two-year pay freeze enforced on them. Now conductors in the RMT union are demanding an increase in pay for working on their days off and on Sundays.

There is a large gap between what TransPennine Express workers get paid for working these days, and what other train crew get.

The workers are also not booking onto any overtime and will refuse to scan tickets electronically. They are set to strike every Sunday.

The outsourced cleaners are paid just £9.68 per hour and receive no sick pay.

That has forced many to frequently come into work while sick as they can’t afford not to.

The two 48-hour strikes are set to begin place on Thursday of next week and Thursday 10 March.

Over 300 Stagecoach bus drivers in Gloucestershire have voted overwhelmingly for strikes over pay. Many of the drivers are paid less than £11 an hour.

If strikes go ahead it will affect depots in Bristol, Cheltenham, Gloucester, Stroud, Colway and Ross‑on-Wye.

Yet the workers’ Unite union has delayed calling action for further talks with bosses.

The best way to get bosses to back down is to call action immediately.

Unite is also balloting its members at Stagecoach’s depot in Swindon with results expected to be announced on Monday of next week.

No to below inflation pay deal at First Manchester buses