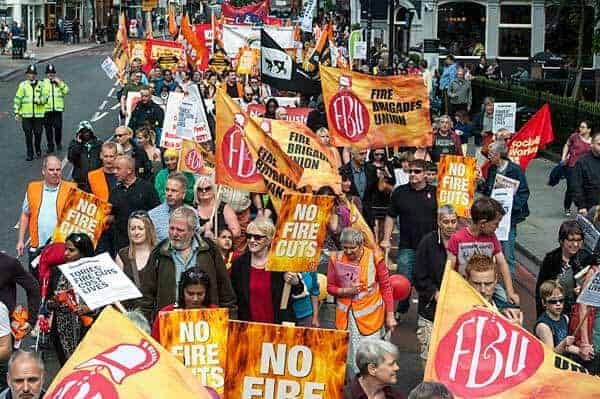 The march demanded action against the cuts (Pic: Guy Smallman)

More than 500 firefighters and their supporters marched from Hackney and Islington, north London yesterday, Saturday, against threatened closure of Clerkenwell and Kingsland fire stations. Banners from the firefighters’ FBU union were joined by Camden and Hackney Unison, Islington TUC, the local Labour and Green parties, and the UCU, NUT and GMB unions.

Firefighter Stavros from Kingsland station spoke to Socialist Worker of plans to cut 12 fire stations in London. He said, “They don’t make sense. London is going to be 10 million people by 2030. A strike would be the last resort for us but if we’re not listened to we can’t sit back and let it happen. We have to fight.”

A woman firefighter who didn’t want to give her name added, “It’s appalling to put lives at risk for a few pennies on council tax. The FBU has to let people know they’re making those cuts.”

Around 100 people marched from Kingsland to join the march from Highbury. Jane Bassett from Hackney National Union of Teachers said, “We’re supporting the firefighters because all of our public services are under attack, schools, hospitals and fire services. We have to join up to fight it”.

At Kingsland bosses ordered firefighters not to even look out of the windows at the demonstration gathering outside. The crowd outside clapped and cheered and made as much noise as possible for them. In Clerkenwell workers were ordered “to do other duties” so they wouldn’t see the march passing.

Andy, a firefighter, said about the threatened closures, “This is about ‘What do we own, what can we sell?’ Imagine what Clerkenwell firestation would be worth as luxury flats. Cuts will affect response times and we know the difference two minutes can make—it’s life or death.”

Local Labour MPs addresses a rally at the end of the march, alongside local campaigns and both Labour and Lib Dem councillors from Islington. FBU general secretary Matt Wrack said, “This is just the start of the fight. We’re told there’s no alternative to austerity but we’ve always been told that. If we had listened we would never have won the vote or the NHS. We’ll have to organise our own alternative too stand up and fight back.” 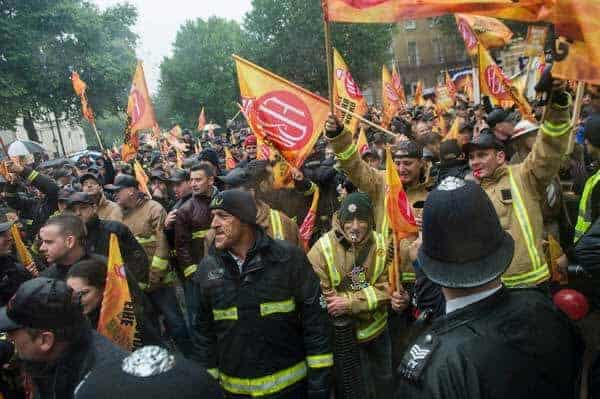