The Black Lives Matter (BLM) that burst onto the streets in the wake of the police murder of George Floyd has not gone away.

Around 1,500 people took to the streets of Notting Hill in west London on the bank holiday weekend.

Chants of, “The UK is not innocent,” and, “Enough is enough,” rang out as people marched down the Bayswater Road to Hyde Park.

The crowd sung Bob Marley’s Redemption song, lay down in the road and raised their fists in the air.

One of the march organisers, youth worker Sasha Johnson, said she wants the movement to “empower the community”.

“As a people, we’re not going to stop until we have equal rights and justice,” she said. “Our message is listen to us, hear our words, we want sustainable and tangible change.

“We don’t just want tokenistic promises, we don’t want it to come from a hegemonic standpoint. We want it to be for the people.”

Marchers’ demands included taking money from police budgets and putting it into youth and community services.

This echoes calls to “defund the police” made by the Black Lives Matter movement in the US. 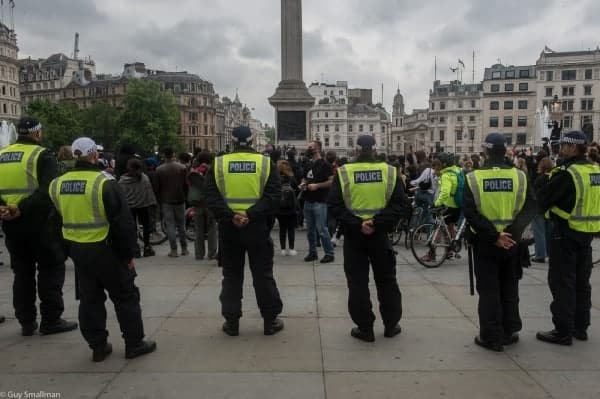 Another organiser, author Anthony Spencer, says they put on the march because fighting institutional racism is a “huge task”.

“This is not a hardened protesters’ march, this is a family protest march for people who don’t normally protest,” he said.

“We’re trying to have a louder voice.”

The march took place during the annual Notting Hill Carnival, which was moved online due to the coronavirus pandemic.

It came as new figures showed how systematic racism locks many black people into low pay and poverty.

They showed that the average black Caribbean household was worth £89,000 in the middle of the past decade.

Black African and Bangladeshi households suffered the most, with household wealth of just £24,000 and £22,000.

These inequalities largely stems from how class and racism shape the sort of jobs people are likely to do.

On the same day around 100 anti-racists held a solidarity protest at a hotel housing asylum seekers in Epping Forest in London.

It came after Nazi group Britain First tried to intimidate refugees at hotels, including in Birmingham, Newcastle and Epping Forest.

The Nazis have been emboldened by racist rhetoric over refugees from Boris Johnson and home secretary Priti Patel. The protest outside The Bell Hotel was organised by the Stand Up To Racism (SUTR) local groups in Waltham Forest, Bishop’s Stortford and Harlow and the Care4Calais aid organisation.

SUTR and Care4Calais also protested outside the Home Office in central London on Tuesday of last week. 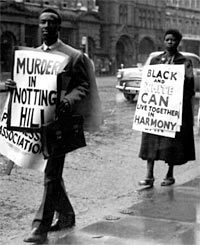 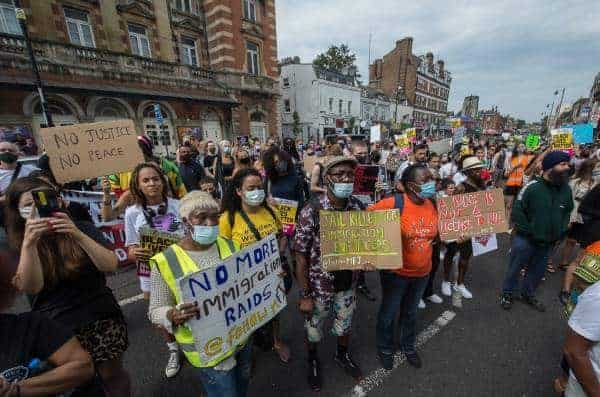