Absolutely no buses ran. More than 50 workers were on the picket line in front of the main depot and ten were on each of the two back entrances.

Another strike is planned for this Saturday. Some strikers are arguing for action during the week when it has an effect on business.

The strike follows the rejection by the 800 low paid workers of a 2.4 percent pay offer.

Strikers remain angry at management’s failure to improve on its offer.

Some of the strikers believe they are being softened up for privatisation and feel the company is becoming top heavy with management.

One striker said, “It’s ridiculous. There are 29 managers in here. You get sent round from one to another over every little thing.” 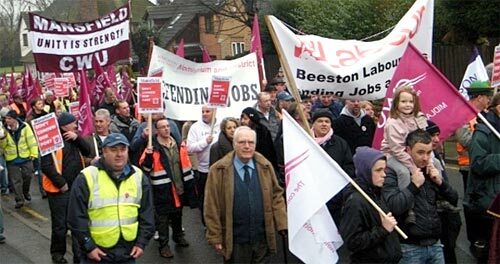 Ballots spring up against the cuts

Strikes in schools across Nottingham