Now Blunkett is after your pension

This article is over 17 years, 1 months old
Tony Blair has brought back the disgraced former home secretary David Blunkett as secretary for work and pensions.
By SUE BOND and MARTIN JOHN
Downloading PDF. Please wait...
Saturday 14 May 2005

Tony Blair has brought back the disgraced former home secretary David Blunkett as secretary for work and pensions.

Blunkett has already declared that nothing is “off-limits” to solve the so-called pensions crisis. He wants to steamroller ahead with plans to make people save for their old age, rather than compelling the state or the employer to contribute more.

Not only will Labour return to attack public sector pensions, it also plans to hit millions of workers who rely on private employers’ schemes or the state pension.

New Labour wants people to save more, to pay more in tax and to retire much later.

There is a threat that it could use the forthcoming review into pensions by Adair Turner, the former head of the CBI bosses’ organisation, to force workers into worthless money purchase schemes.

These are a poor substitute for decent occupational pension schemes.

They make people much more likely to be fleeced by the financial services industry and there is no guarantee how much the worker will get at pension age. Many workers in the private sector have had their schemes asset stripped by their bosses.

Now the government wants to rob the pensions of people in both the public and private sectors. Blunkett’s plans will hit people who are least able to afford it.

People would save more for their old age if they could afford to, but people are struggling to get by under New Labour.

If Blunkett’s plans come in, is the government going to raise the level of the minimum wage? Is it going to address low wages in the public sector?

When Blunkett says nothing is “off-limits” does this mean that the pension age could be raised?

All the surveys show that people on the lowest wages will lose out, as they die younger than those on higher wages. The unions are fighting for decent occupational schemes.

Sue Bond is the vice president of the PCS civil service workers’ union. Martin John is on the national executive of the PCS. They write in a personal capacity. 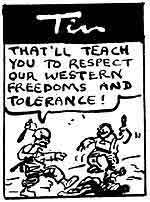