Now is a good time to fight

This article is over 17 years, 4 months old
The New Labour government is lurching from crisis to crisis. The war on Iraq and the disastrous occupation have bred deep dissatisfaction among millions of people.
Downloading PDF. Please wait...
Saturday 25 September 2004

The New Labour government is lurching from crisis to crisis. The war on Iraq and the disastrous occupation have bred deep dissatisfaction among millions of people.

Blair was forced to admit to his cabinet last week that they face growing pressure on the electoral front.

The Labour vote is crumbling in working class constituencies where previously victory would be taken for granted.

If powerful groups of workers take action now they can open up another front against the government and help to finish Blair. That is why now is such a good time for the unions to fight.

TGWU leader Tony Woodley and Amicus leader Derek Simpson have pledged to back their members in Jaguar. And the union leaders have all condemned the government’s plans to slash 104,000 civil service workers’ jobs.

That plan would mean shutting the same job centres that Blair wants to force Jaguar workers into.

Action over jobs could see a fightback across both private and public sectors and ensure that the civil service workers’ PCS union does not fight alone.

It would galvanise the millions of people who are disgusted with this government’s warmongering, its attacks on working people like the firefighters and civil service workers, and its big business agenda.

It is clear that car workers at Jaguar and civil service workers want to stand up against the job losses. The union leaders must lead that fight. 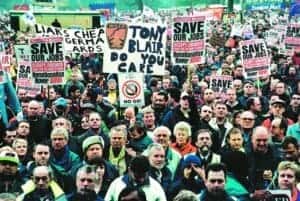