This article is over 9 years, 3 months old
The National Union of Journalists (NUJ) will hold a national delegate meeting (DM) at the beginning of October amid controversy over the leadership’s financial recovery plan.
By Alan Gibson, NUJ executive (pc)
Downloading PDF. Please wait...
Tuesday 25 September 2012

The National Union of Journalists (NUJ) will hold a national delegate meeting (DM) at the beginning of October amid controversy over the leadership’s financial recovery plan.

The controversy comes when many members are crying out for the leadership to start a fight over jobs, pay and conditions.

The financial plan was delivered with the message that unless it was accepted the union would be bankrupt by October. It was implemented in May with little warning to the union’s national executive.

Since then the union has made six members of staff redundant and agreed lower hours, and thus less pay, with several others. It has also closed the union’s highly regarded training department.

At the DM the leadership will propose the union agrees to biennial DMs, a cut in the number of delegates and a rise in subscriptions.

Not surprisingly the plan has created confusion and anger among members. An alternative recovery plan written by NUJ members at the Financial Times (FT) has helped to give this focus.

Based on a study of the accounts, the alternative says there is no need for redundancies and that DM expenses could be cut back so that annual meetings can be sustained.

It also argues that, rather than simply raising subscriptions, the whole system of membership fees should be overhauled. This point has been raised by members on countless occasions before.

Members at the FT have since circulated an open letter condemning the closure of the training department and calling for the decision to be reversed.

This should be a bumper year for the NUJ. The Leveson Inquiry has uncovered a seething mass of scandal involving the media, highlighting the need for far stronger union organisation across the industry.

Every member agrees with the leadership’s stress on recruitment in order to rebuild the union’s industrial and financial strength. But there are huge disagreements about the way that should be done.

The leadership believes people can be attracted on the basis of the services the union can offer. But this has been badly damaged by the cuts it has carried out. Many delegates will vote against the move to biennial meetings and against the proposed subs rise.

They will also argue the best way to recruit is through militant union organisation. This is proven by the FT and Reuters earlier this year, where industrial action not only scored victories, but gained new members. 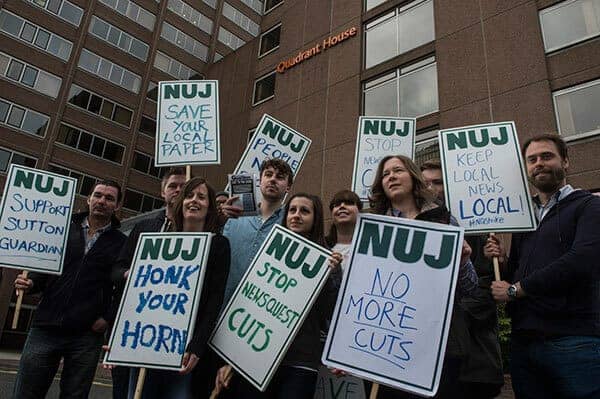 NUJ fightback in York could pave way for national battle