This article is over 11 years, 8 months old
Journalists at the Johnston Press Group were deciding on whether to set a date for a group-wide strike as Socialist Worker went to press.
Downloading PDF. Please wait...
Tuesday 11 May 2010

Journalists at the Johnston Press Group were deciding on whether to set a date for a group-wide strike as Socialist Worker went to press.

If it goes ahead, it will be the first group strike in 20 years.

Over 550 members of the NUJ union across 22 centres within the Johnston Group voted by 70 percent in favour of industrial action.

The strike is over job cuts and changing work conditions caused by a new editorial production system.

NUJ members in Scarborough have already struck for 24 hours, journalists in Blackpool are working to rule and staff at Sheffield held a short stoppage to trigger their ballot.

Julia Armstrong, NUJ convenor at Sheffield, said, “The decision to call a national ballot across the Johnston Group is historic.

“The introduction of the new system has caused stress levels to rocket.

“We feel we’re being made to pay the price as management panics over falling circulation, but they are still making massive profits.”

Johnston Press workers in Scarborough were told that their work was being moved to Sheffield, almost 100 miles away. If they refuse to move, the company insists they accept or apply for lower-paid reporting jobs or take severance pay.

Journalists confronted Johnston Group directors at a recent shareholders meeting where directors defended the £1 million paid to the chief executive in 2009, describing it as “market value.” Yet trainee reporters at the group take home £11,000 a year.

Pete Murray, NUJ president, told Socialist Worker about the difficulties of organising the ballot, “Johnston owns a large number of newspapers across the country but they claim they don’t employ any journalists.

“So it has taken a lot of organising to get all of the chapels [union branches] involved.

“They try to keep us divided by splitting the various publications up under different companies. So we have never managed to organise a ballot across the whole group – until now.” 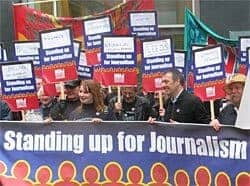 Michelle Stanistreet: Stand up for journalists 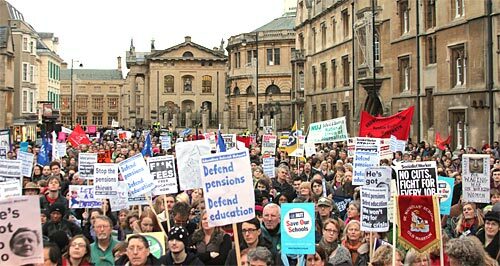 130 ballots for action over Xmas