Sixty people attended a meeting on Wednesday of last week, organised by Open Dalston, who are leading the campaign to develop the site for local use.

An interim possesssion order has been issued demanding the occupiers leave by 7pm on Saturday of last week. The occupiers were supported by a demonstration on Saturday afternoon and are refusing to go. No attempt has been made to remove them as Socialist Worker went to press.

Socialist Worker spoke to Charlie Collins, who explained that he has been involved with the venue since organising concerts in the foyer while it was still a cinema. He was MC when they showcased Stevie Wonder in 1966.

After the cinema closed they transformed the foyer into a major venue for reggae and other black music – the Four Aces club. In the 1990s the original theatre auditorium was added to make the Labyrinth which pioneered drum and bass. It was closed after a compulsory purchase order in 1999.

Charlie himself performed as Sir Collins, his releases including a 1981 tribute album for the victims of the New Cross fire.

Tragically, his son Steve was one of 13 young black people who died when a house burned during a birthday party. Arson was suspected, and there was outrage at the indifferent police response.

Charlie planted a tree for each victim in the grounds of the Four Aces club. He says these are now beautiful trees and one of his biggest worries is that they could be destroyed.

Charlie says, “I sit on the fence over whether the site should be restored or developed for the local community – particularly the Afro-Caribbean community. But don’t let them just take it away from us.”

For more on the campaign go to www.opendalston.blogspot.com 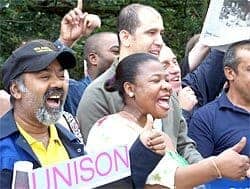