Occupy London’s ‘Bank of Ideas’ survives its day in court

The Court of Appeal granted an extended stay of execution to appeal a decision by the High Court which would have meant their eviction within 24 hours.

This is a win for the occupiers, who can now continue to use the space for organisation and community projects.

Occupy London spokesperson Naomi Colvin told Socialist Worker that UBS lawyers had effectively shot themselves in the foot. ‘We’ve now been given seven days for further appeal,’ she added.

The process after this could take several weeks, meaning that the community artistic space could survive until the new year.

Earlier today at the High Court, Mr Justice Roth did not set aside an injunction or possession order which could have meant the eviction of the occupation within 24 hours.

The building is owned by Sun Street Properties, a subsidiary of huge bank UBS.

It emerged in a court hearing on Monday that UBS lawyers had already booked a ‘slot’ for police and enforcement officers to remove protesters on Tuesday.

Mr Justice Roth accepted the occupiers’ claim that the way the possession order was obtained was unlawful and represented a breakdown in fair procedure. It was in this context that the extended appeal application was extended.

The Bank of Ideas was occupied on 18 November, extending Occupy London to a third site on top of the camps at St Paul’s and Finsbury Square.

The 400-room space has been used for dozens of social projects in the weeks since, after having been left empty by the bank for years. 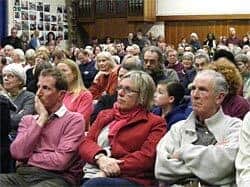