Occupy protesters march on the Bank of England

Protesters marched on a “tour” of City banks including Goldman Sachs, Merrill Lynch and Santander.

Ragnhild Freng Dale, editor of the group’s newspaper Occupied Times, told the crowd, “No one planned for the world to look as it does today. That means we can change it. We can build a world we want to see.

“It’s not about money, it’s about people. The most important thing Occupy has done is build a community.”

Occupy tried to set up camp outside the Bank of England with a banner that said “The Bank of England is the St Paul’s of money”. But they were stopped by heavy policing. They have more events organised this month as part of “Occupy May”.

Many who had not been involved before joined the march.

“This is my first protest,” Eva Moss, an art graduate, told Socialist Worker. “Predatory capitalism is what I’m against. Capitalism could work but at the moment it’s only benefiting very few.”

Media worker Camille Charriere had a different view. She said, “We need to change the economic system.

“If it comes to revolution, I’ll go for it.” 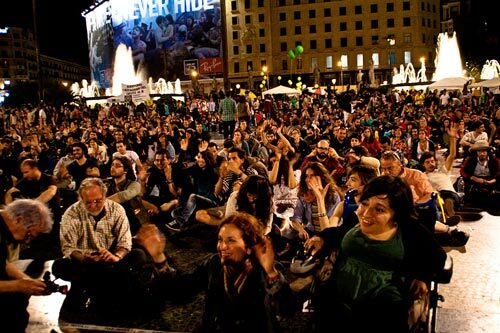 Spain's indignados make a return to the streets