TRADE AND industry secretary Stephen Byers has referred the takeover of the Biwater pipe factory in Clay Cross back to the Office of Fair Trading (OFT). The OFT originally gave the go ahead for multinational St Gobain to take over Biwater. As soon as that deal went through St Gobain announced it was closing the Clay Cross plant with the loss of 700 jobs.

Furious workers staged a series of protests. Stewards, union officials and local MPs have been lobbying Byers and also travelling to Europe to exert pressure on European Union bodies. The protests and pressure so far seem to have forced Byers to at least tell the OFT to have another look at the deal.

But there is no guarantee this will result in any moves which will save jobs in Clay Cross. Last week the first redundancy notices were sent out by St Gobain. At the beginning of November the first workers will be going down the road unless the company is stopped.

The best way to achieve that, and force the government and OFT to block the jobs massacre, remains with workers occupying the factory. Some workers are pressing for mass meetings to discuss such questions. They are also pushing for all Biwater workers to travel to London to lobby parliament when it reopens next week.

BIWATER workers should follow the example of workers at a subsidiary of St Gobain in France who showed exactly how to fight. Workers at the Verreries de L’Orne factory in Escouch erupted in fury after management axed an 18 bonus. They struck and blockaded the factory. They are demanding a 17.5-day cut in annual working hours, a 35 a month pay rise and the creation of more jobs, including giving permanent posts to those on temporary contracts. The workers imprisoned the factory boss and “human resources” director in their offices.

“We had to shake them up a little so they would come and talk,” said Serge Catherine, the CGT union rep. The factory makes glass bottles for top perfume companies. Their products are in high demand in the run-up to Christmas, putting the workers in a strong position. 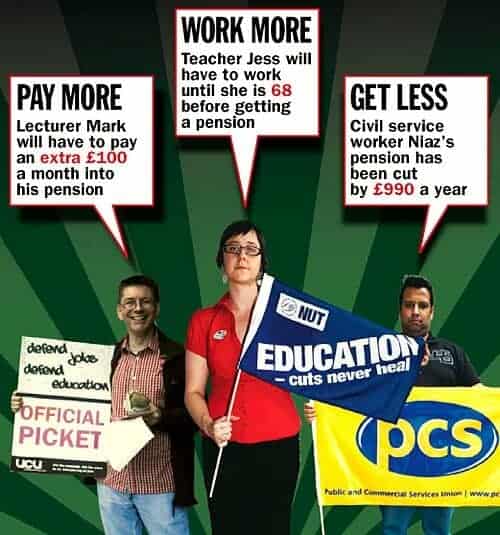 Graphic: why public sector workers are fighting for their pensions