Offer is far from purrfect

This article is over 17 years, 2 months old
OVER 300 TGWU union members working for the Lynx distribution company were set to strike on Friday of this week and Monday of next over pay.
Downloading PDF. Please wait...
Saturday 06 November 2004

OVER 300 TGWU union members working for the Lynx distribution company were set to strike on Friday of this week and Monday of next over pay.

The union balloted 240 members for action. Since then 100 more have applied to join the TGWU, such is the strength of feeling over a two-year pay offer that workers feel amounts to “a thinly disguised pay cut”.

The drivers, and warehouse and engineering staff, are also angry the offer does nothing to reduce the working week ahead of the new European Working Time Directive coming in next March.

The union is looking for a real rise and moves towards a 48-hour working week without loss of pay.

Will it be OK by morning?

JOURNALISTS AT the Manchester Evening News have narrowly voted to accept an improved package from management after voting for strikes over the introduction of a new morning title.

Twelve new staff will be taken on to work the new shifts required. These are not new jobs, but involve filling four vacancies and replacing eight journalists who want to leave.

There are also some improvements to allowance payments, and there will be a joint union and management review of how the new rotas are implemented.

Protests across the Co-op Group

FUNERAL WORKERS are continuing their campaign against Co-operative Funeralcare with demonstrations outside the Co-operative Group’s other business premises.

Following last week’s successful strike, protests took place in many areas on Saturday over pay and a lack of respect by the company.

“We do a difficult job with a great deal of care for £12,500 a year,” explained one funeral worker in Bristol.

“We made an £18 million profit for Co-op bosses last year—now they won’t pay up.”

ABOUT 60 people attended a meeting hosted by Cambridge University Islamic Society in support of the Stop Political Terror campaign on Saturday.

They heard Ashfaq Ahmad speak movingly about the arrest and detention of his son, Babar.

Abu Yusuf, an international lawyer, also spoke about the climate of fear that has been created since the “war on terror” began.

He described the great cruelty being suffered by the Muslim community, mainly in silence, because of the government’s propaganda war based on lies and deception.

The meeting resolved to write to political prisoners being held in Britain and to arrange a meeting with Anne Campbell, the Labour MP for Cambridge, to press Babar Ahmad’s case.

Teachers vote for action but NUT executive rules out strikes 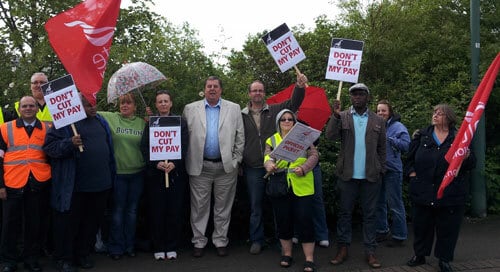 Office of the Parliamentary and Health Service Ombudsman to strike